OFFICIALS of Catanduanes and Albay, two provinces in the Bicol Region worst hit by super typhoon “Rolly,” yesterday appealed for food and relief items for their constituents and other materials for the reconstruction of their devastated provinces.

“First, we need relief goods because we’re in the middle of the pandemic and we’ve almost fully exhausted our funds for relief operations in areas that were locked down due to COVID-19. Our funds are nearly depleted,” said Catanduanes Gov. Joseph Cua.

Rolly, which has weakened into a tropical storm, left 24 dead as of yesterday. The Office of Civil Defense-Bicol said 14 of the fatalities were from Albay and six from Catanduanes.

Police reported three deaths in the Calabarzon region and one in the Mimaropa region. But the official tally of the National Disaster Risk Reduction and Management Council remained at 17 dead.

Rolly was forecast to exit the Philippine area of responsibility yesterday as tropical storm “Siony” continued to threaten the country.

As of 3 p.m. yesterday, Siony was some 620 km east of Basco, Batanes. It was slowly moving northeast, with maximum sustained winds of 85 kph near the center and gustiness of up to 105 kph, the Philippine Atmospheric, Geophysical and Astronomical Services Administration (PAGASA) said.

In a bulletin issued at 11 a.m. yesterday, PAGASA said Siony was forecast to move slowly within the next 24 hours.

“A landfall scenario over Batanes-Babuyan Islands area around Friday remains likely,” PAGASA said. “However, due to the projected quasi-stationary state of this tropical storm, there remains a high degree of uncertainty in the forecast track,” PAGASA also said.

It also said Siony may intensify into severe tropical storm today or tomorrow, then to a typhoon “prior to close approach or landfall over extreme northern Luzon.”

Cua said the province prepositioned only about 3,000 food packs but the number of affected families has reached 15,000. He said the social welfare department has promised to send food packs to Catanduanes.

Cua said the province also needs potable water because their water system was damaged by Rolly, forcing them to get water from deep wells. “We really need help from the national agency, NGOs (non-government organizations), we hope you can help us,” he said.

“Although we already talked to the DSWD, we hope we’ll be given relief goods. We hope agencies like OCD (Office of Civil Defense), NGOs, foundations will immediately help us because we’re running out of cash,” said Cua.

“Because of the pandemic, we’ve already spent most of our calamity funds due to COVID-19. Our funds are almost exhausted, that’s why we badly need help from national agencies,” Cua also said.

“What we need are construction materials for all those badly damaged houses and of course food because the crops are wiped out and well have to start planting again,” he said, adding the province is now left with only P60 million in calamity funds for the rest of the year due to their COVID-19 response.

Bichara said the provincial government also needs assistance for the construction of houses for some 6,000 persons who are now homeless because their houses were destroyed by the typhoon. Houses of about 20,000 residents were also damaged..

“Until now, some of the houses are still submerged and they (residents) have to stay in evacuation centers. We have no electricity because the NGCP (National Grid Corporation of the Philippines) transmission towers and lines and substations were damaged… Ninety percent of the posts of the electric cooperatives are down,” he said.

Guinobatan Mayor Ann Yap Ongjoco also appealed for assistance from national government for the relocation of residents near Mayon Volcano, who she said have to be evacuated every time storms come in.

Ongjoco said the city government has space but no funds to construct houses for those residents.

Cua, on reports that quarrying led to flashfloods, including in Guinobatan town, said he said the flooding was due to lahar that accumulated on Mayon Volcano.

Cua said there was no quarrying operation within the six-kilometer radius of Mayon Volcano. “There is no quarrying, no operations, nothing… What happened was there was enormous supply of volcanic debris,” he said.

Cua said the province is very strict in issuing permits to quarrying firms which have first to secure environmental compliance certificates from the Department of Environment and Natural Resources.

Malacañang said at least P6.6 million worth of aid has been released by the Department of Social Welfare and Development to assist close to 270,000 persons staying in about 2,600 evacuations centers.

Budget Secretary Wendel Avisado on Monday night reported to President Duterte, that the National Disaster Risk Reduction and Management Fund budget still stands at P3.62 billion after the budget department augmented it with P5 billion through the Bayanihan to Recover as One Act or Bayanihan 2.

Avisado said the DBM replenishes the Quick Response Funds of different agencies when these are depleted to ensure that those departments can adequately respond to disasters.

The President, during the Monday meeting, said what is important is that the people are made aware that the government still has money and that aid will be coming to them.

The OCD-Bicol placed the cost of damage to infrastructure at P4.62 billion and damage to agriculture at P1.18 billion. 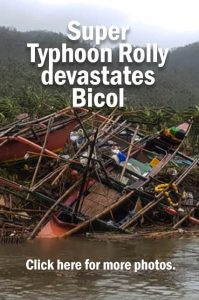 OCD-Bicol also reported that entire provinces of Albay, Camarines Norte, Catanduanes, and Sorsogon and Naga City are still without electricity. It said a large portion of Camarines Sur and Masbate are also without power.

Despite this, he said, the country was able to “save” 1.071 million metric tons of rice worth P16.9 billion and 45,703 metric tons of corn worth P579 million because of early typhoon warnings and advisories.

Dar said the Department of Agriculture is prepared to distribute seedlings to those who were affected by the typhoons, including 133,326 bags of rice seeds, 17,545 bags of corn seeds, and 1,980 kilograms of assorted vegetables.

He said DA will also distribute some 10 million tilapia and milkfish fingerlings along with fishing gear and paraphernalia, as well as animal stocks and feeds, livestock and poultry aid to livestock raisers.

The President has directed the Local Water Utilities Administration (LWUA) to repair the water system in Catanduanes immediately as people were forced to rely on deep wells.

Energy Undersecretary Felix Fuentebella reported that several teams from various regions are on their way to provide service and assistance to the worst-hit areas especially in the Bicol region.

Fuentebella said the Manila Electric Company is also working at completing the restoration of power in their franchise areas as 1,838 customers in the Calabarzon (Region IV) area have been disconnected during the typhoon.

Smart and Globe are providing “libreng tawag” services and charging stations in the province.

Roque said the LT Group of companies has donated drinking water to Catanduanes, which was flown in via a C-130 plane, along with other relief packs and equipment, yesterday.

Labor Secretary Silvestre Bello III, during a briefing in Malacañang yesterday, said the Department of Labor is providing funds for the hiring of 5,000 people in Catanduanes to help in clearing of streets to enable repairs and restoration of power and communication in the province.

Rolly damaged some P5.8 billion in roads, bridges, flood-control structures, and public buildings, according to Department of Public Works and Highways.