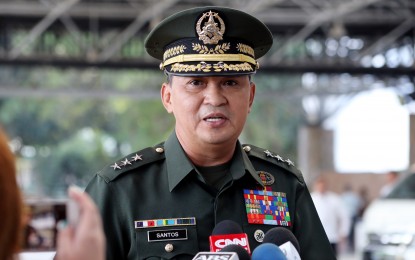 “Let us put the interest of the organization above our own. Let us allow the investigation to take its course and (allow the courts to) punish those who are responsible,” Arevalo said in a radio interview quoting Santos.

Arevalo said the military leadership is optimistic soldiers would not avenge the death of Maj. Marvin Indammog, Capt. Irwin Managuelod, Sgt. Jaime Velasco, and Cpl. Abdal Asula because “we are a professional organization.”

“The chief of staff said ‘eyes on the ball.’ We still have enemies which are the terrorists…

Let us not forget that we have other important missions to accomplish and this (Sulu incident) is an isolated case,” he also said.

Army spokesman Col. Ramon Zagala on Friday said a soldier witnessed the killing of the soldiers who the military said were on a counter-terrorism mission. He said the fifth soldier involved in the mission, called a “sweeper,” was aboard a motorcycle trailing the victims’ van.

The military has said the intelligence operatives were flagged down by the policemen. A police report showed the soldiers triggered a firefight. The conflicting versions of the incident prompted the military and police chiefs to let the NBI conduct an investigation.

Arevalo said the AFP and the PNP remain partners in the campaign against terrorism, criminality, drugs and against the COVID-19 pandemic.

Arevalo also said the NBI has interviewed three eyewitnesses in the case, and the three have given similar statements. He did not give details.

Army chief Lt. Gen. Gilbert Gapay and government officials have said the soldiers were killed without any provocation and there was no firefight. An official police report on the incident said the four soldiers aimed their guns at the policemen. Last week, Interior Secretary Eduardo Año said witnesses’ statements point to a rubout.

President Duterte went to Zamboanga City last Friday and talked with military and police commanders. Año yesterday said the President told the soldiers to “observe of course the due process and wait for the result of the investigation being conducted by the NBI.”

Año said military and police commanders agreed to let the NBI look into the case and “not to escalate the tension and make sure that nothing will change in the working relationship between policemen and soldiers.”

Año said the President also talked to the nine policemen involved in the incident and told them to tell him what really happened and to cooperate with investigators. He said the President was “very emotional” and was obviously hurt by what happened.

Año also said the nine policemen will be transferred to the PNP headquarters in Camp Crame in Quezon City, pending the probe.

Año said the policemen were supposed to join him and PNP chief Gen. Archie Gamboa on a plane on their way back to Metro Manila on Friday but one of the suspects tested positive for COVID-19 during a rapid test.

“They are together so we don’t know if the others were also infected. You cannot allow them to board the plane with us, I’m with the chief PNP. We will just be forced to go on quarantine so they (suspects) will board a separate flight,” he said.

Año said the NBI has initial findings on the incident “but we don’t want to preclude the investigation.”

Making awesome available to almost everyone