THIS could be proof that the country is flattening the curve.

Only 1,383 new coronavirus disease (COVID-19) cases were reported yesterday by the Department of Health although there were 15 more deaths. 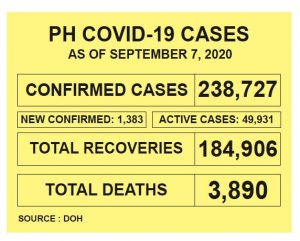 In its latest bulletin, the DOH said majority of the new cases came from the National Capital Region with 525, while Laguna had 137, Batangas 99, Negros Occidental 77, and Cavite 69.

For the past few weeks, the number of new cases in the country was consistently near or over 2,000.

The DOH also said there were 230 new recoveries, raising the number of survivors to 184,906.

Meanwhile, Health Undersecretary Maria Rosario Vergeire said there are 1,742 areas with clustering of COVID-19 cases. Majority of the areas are found in communities with 1,480 or 84.9 percent.

Some 5.11 percent or 89 areas were found in hospitals or healthcare facilities, while 1.84 percent or 32 areas are in jails and prison facilities.

Vergeire said the other 141 or 8.09 percent were found in various settings, such as in workplaces and transportation sectors. Clustering is defined as places  where there are two or more COVID- 19 cases at a specific time.

The DFA said a total of 10,129 Filipinos in 74 countries have been  infected with the virus since its outbreak late last year. The number of fatalities increased to 763 after five more  deaths were reported by the DFA. The Middle East/African re gions remained the place where most of the Filipinos who were infected with COVID-19 took place as well as the fatalities with 6, 986 and 482 respectively.

The Asia and the Pacific registered 1,177 cases with Europe closely behind with 1,168. The Americas reported 798 cas es though it came in after the Middle East/African regions in terms of deaths with 178 compared to 95 and 8 in Europe and the Asia Pacific regions respectively.

Presidential spokesman Harry Roque went on a self-imposed home quarantine after one of his security aides tested positive for the deadly virus last September 5.

Roque, who conducted his virtual briefing yesterday from his home,  said he had himself tested “and it yielded a negative result” but he still opted to undergo self quarantine. He attended the distribution of face masks and attended a briefing  on the COVID-19 situation in Pasay City last Saturday but said that none of the people who attended the event, like the media, need to undergo quarantine since the concerned security aide was “not my assigned close-in security but the one in charge of my vehicle” who “did not leave the vehicle.”

He said he will continue to discharge his functions from his home and will “virtually” attend the meeting convened by President Duterte on Monday night with select members of the Cabinet via online arrangements. Among the Cabinet members who had tested positive for COVID- 19 in the past include Education Secretary Leonor Briones,  Public Works Secretary Mark Villar and Interior and Local Government Secretary Eduardo Ano, who  was infected twice.