EIGHTY more deaths were reported by the Department of Health yesterday, raising the number of fatalities to 4,066, while 3,821 new cases jacked up the total number of COVID-19 cases in the country to 248,947. 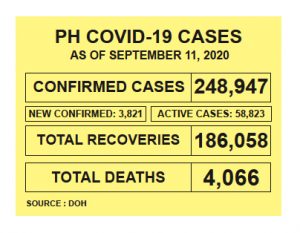 The Department of Foreign Affairs said five overseas Filipinos have succumbed to the virus, raising the death toll to 768.

The DFA also reported that 11 more were infected with the virus, bringing to 10,162 the number of Filipinos in 74 countries who have contracted COVID-19.

There were 31 new recoveries, raising the number of recoveries to 6,413.

Of the 10,162 cases among overseas Filipinos and 768 deaths, 7,002 and 487, respectively, were recorded in the Middle East/African regions while 1,189 cases were reported in the Asia Pacific region.

Meanwhile, at least 15 inmates or persons deprived of liberty (PDL) have so far died of COVID-19, according to the Bureau of Jail Management and Penology.

“Right now, we have 15 PDLs who died of COVID-19,” BJMP Director Alan Iral told the House committee on appropriations’ hearing on the Department of Interior and Local Government’s P246.1 billion proposed national budget for 2021.

Iral said more than 1,100 prisoners have caught the virus but only 175 cases remain active now.

Last July, it was reported that some high-profile convicts, including Jaybee Sebastian, had succumbed to the disease.

Sebastian, who in 2016 confessed to running the Bilibid drug trade, was among the inmates who implicated former justice secretary and now Sen. Leila de Lima to the drug trade. She is still detained at the PNP Headquarters in Camp Crame.

Iral said PDLs who tested positive were immediately brought to an isolation facility to control the spread of the virus in jails across the country.

He said that 1,501 PDLs considered vulnerable to COVID-19 have been released since the pandemic started – 560 senior citizens, 909 inmates who are sick and 32 pregnant women.

Bayan Muna party-list Rep. Ferdinand Gaite said the state of jails in the country remains miserable because the actual inmate population is more than 215,000 when the capacity is only 40,000. – With Ashzel Hachero and Wendell Vigilia