AS much as 4,000 new coronavirus disease (COVID-19) cases per day may be reported once the emerging holiday surge continues and goes unabated, the Department of Health (DOH) warned on Thursday, just a day after saying the spike in infections in Metro Manila is already manifesting. 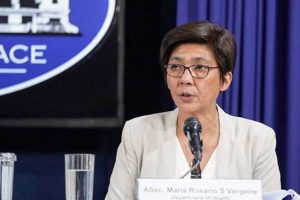 “Initial projections confirm the high likelihood of a surge during and after the holidays, if it goes without intervention,” Health Undersecretary Maria Rosario Vergeire said in a virtual press conference.

“The cases in the National Capital Region may reach upwards to 4,000 cases per day,” she said.

Vergeire said this proves the earlier statement of Health Secretary Francisco Duque III that a surge is already becoming evident in Metro Manila.

“It is not a question anymore ‘if’ a surge will happen, but of ‘when’ and ‘how much’,” said Vergeire.

In a separate statement, Duque reiterated their observations over the last few weeks.

“There has been a slowing down of the previous improvement in the epidemic curve. There has been a continuous growth of cases in Metro Manila, signaling the start of a surge,” said Duque.

The health official said the mass gathering of people and the decrease in the adherence to minimum health standards during the holiday season are seen as the cause of the surge in cases.

“Although they are in open spaces, there are still many people around, which increases the risks of transmission,” Vergeire said, adding: “It is important to remember that we need to follow all the components of the minimum public health standards to reduce the transmission risk.”

And with NCR cases spiking anew, health officials feared the health systems capacity in Metro Manila could again be overwhelmed and medical facilities inundated with COVID-19 patients not seen since August.

“If this trend continues and is not mitigated, it will lead to a sharp spike of cases that might overwhelm our health system capacity, similar to the peak we experienced last August in the NCR,” said Duque.

“It may overwhelm our health systems capacity to upwards of 80 percent utilization by the end of January if we do not act aggressively to halt the transmission now,” added Vergeire.

They also asked the public to avoid activities that are in closed settings, crowded areas, poor ventilation, and having close conversations and singing.

“We have witnessed what a spike in cases might mean to us—the extensive lockdowns and how it has affected our families, our healthcare workers, the small businesses and large enterprises alike, and how it almost, if not completely, paralyzed our economy,” said the health chief.

“We do not want that to happen again. In our own ways, we can stop this surge from happening,” Duque added.

Duque said saliva-carrying COVID-19 can be transmitted when blowing horns, along with having conversation during dinner, or even singing in karaokes as people usually remove their face masks and face shield during these activities.

“We discourage the use of these trumpets because you are spreading the COVID like a cannon when you do this,” he said.

Presidential spokesman Harry Roque warned some parts of the country may revert back to stricter quarantine classifications if a surge in COVID-19 cases happens during the holidays.

Duque said the government is scaling up the country’s healthcare capacities in preparation for a possible increase in COVID-19 cases during the holiday season.

The President again appealed to the public to sacrifice by obeying health standards during the holiday celebrations.

“I’ll repeat: Please continue to obey the protocol. My countrymen, please obey the policy of government. This is for all of you. Just a little more sacrifice. The vaccine is already there,” he said.

Interior Secretary Eduardo Año cited the Christmas spirit, especially people going to malls to do their shopping, as among the reason for the increasing number of daily COVID-19 cases in Metro Manila. “The numbers have been increasing for the last two weeks, the numbers are increasing in Metro Manila,” said Año.

Citing a DOH briefing, Año said COVID-19 cases in nine Metro Manila cities have increased for the past two weeks.

The government is seeking the inoculation of 60 to 85 million Filipinos starting 2021 with the bulk of the millions of the vaccine expected to be delivered by second to third quarter of next year.

PNP chief Gen. Debold Sinas said that while Christmas parties are banned amid the pandemic, people can still have dinner to celebrate Christmas.

What is banned, Sinas, said are gatherings where there are entertainment and drinking sprees.

Sinas assured the public that policemen will follow protocols when monitoring and checking reports that Christmas parties are being held inside residences. “You know, policemen will not just barge inside, that’s trespassing,” he said.

But if they verify there is playing of loud music and the neighborhood lodge a complaint for violation of city or town ordinances, “that’s another story,” said Sinas. – With Jocelyn Montemayor and Victor Reyes