AFTER a week with less than 3,000 cases daily, the Department of Health yesterday reported 3,073 new coronavirus disease (COVID-19) cases, raising the number of infections in the country to 307,288. 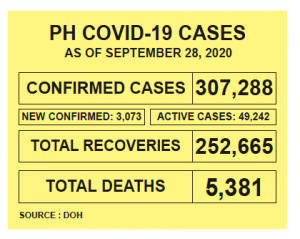 The DOH also reported 37 more deaths, meaning the number of fatalities has risen to 5,381.

Majority of the new deaths were recorded in Western Visayas with 21. Other deaths were reported from NCR (8), and CALABARZON (4).

The number of infected overseas Filipinos rose to 10,467 after 29 new confirmed cases, the Department of Foreign Affairs said.

The DFA also reported another fatality, bringing the number of overseas Filipinos who succumbed to the deadly virus to 792.

In terms of cases and deaths among overseas Filipinos, the Middle East and African regions were still tops with 7, 097 and 511, respectively.

The Asia Pacific region has the second highest number of cases at 1,383 with only 8 deaths followed by Europe with 1,179 cases and 95 deaths.

The DFA also said 16 Filipino seamen and three land-based workers who have been stranded for several months in China due to the pandemic will be repatriated today, Tuesday.

DFA Undersecretary for Migrant Workers Affairs Sarah Lou Arriola said the 19 will arrive around 1a.m. aboard a chartered flight.

“Both are Chinese fishing vessels which were affected by China’s no disembarkation policy as precautionary measure due to the pandemic and unavailability of flights,” Arriola said.

She said the DFA, through its consulate in Xiamen, China has been monitoring their welfare since they were stranded.

“The Consulate has been providing them welfare assistance and ensured that their salaries and other entitlements are provided for by their employer,” Arriola said. The DFA had earlier said 195, 224 overseas Filipinos affected by the pandemic have been repatriated to the country since February this year. Of this, 67,484 are sea-based workers. – With Ashzel Hachero