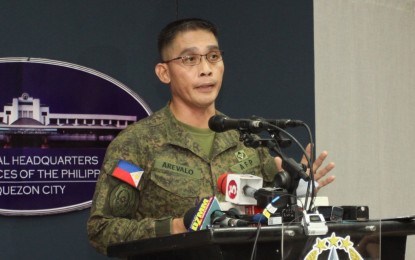 THE Department of Health has approved the use of 30 military camps as COVID-19 vaccination sites, out of 46 camps and treatment facilities recommended by the Armed Forces, AFP spokesman Maj. Gen. Edgard Arevalo said yesterday.

The Armed Forces spokesman said the sites were recommended “for security and accessibility” considerations.

“Out of that number, 30 are already DOH-accredited and hence can be used as vaccine sites. The remaining 16 is subject to DOH inspection and, when they pass, subsequent accreditation,” said Arevalo.

The first batch of vaccines is expected to arrive in the country next week. The national government last week conducted its first simulation for the vaccination rollout program.

Arevalo said the military is playing a big role in the government’s vaccination program, particularly in the field of medical support operation or augmentation of medical frontliners from DOH and other agencies.

“Our chief of staff, General (Cirilito) Sobejana said we’re ready to allow the use, open our camps (and treatment facilities) as vaccination sites,” said Arevalo.

On Monday last week, President Duterte said he wants police stations and military camps to be used a vaccine sites, if there are no suitable venues for the inoculation in rural areas.
Arevalo said the military will also be playing a key role in the transport of the vaccines and security of the vaccination centers.

Specifically, he said, Navy ships and the six newly-delivered Black Hawk helicopters of the Air Force will be among the military assets that are earmarked for the transport of the vaccines.

If needed, Arevalo also said, the AFP can send about 400 hundred doctors and nurses to augment medical frontline workers from the DOH and local agencies for the actual inoculation.

“The AFP is ready to extend the necessary support to achieve success in our herd vaccination (immunity),” said Arevalo.

Meanwhile, the PNP said it has prepared a vaccination plan, called “Caduceus,” that primarily deals with providing security to the transportation and inoculation.

“The role of the Philippine National Police is to provide security for the transportation, from the point of origin to the point of destination of the vaccines,” said Usana.

“We also have contingency planning just in case there are changes somewhere else, including those that may be caused by weather condition and security issues,” Usana also said.

Interior Undersecretary and spokesman Jonathan Malaya said the instruction of the interior department to the PNP is ensure the security of the vaccines.

“From the airport to the cold chain facility, until they reach the vaccination centers, policemen should be there,” he said.

Senate minority leader Franklin Drilon said delays in the arrival of vaccines opens the doors for smugglers because a number of individuals with resources are willing to pay just to get vaccinated, like in the case of the Presidential Security Group.

Members of President Duterte’s security detail were vaccinated sometime in September or October last year. At that time, no vaccine has secured a permit from government. The PSG gave no details as to which vaccine was used, who procured it, and how it got into the country. The NBI is still investigating.

The Food and Drug Administration last week said it granted a “compassionate special permit” to the PSG to bring in some 10,000 doses of COVID-19 vaccines made by Sinopharm.

Drilon said CSPs are given only to individuals in need of prescription medicines not readily available in the local market and those without emergency use authorization.

“To me that is a clear system to go around the law,” he added.

Asked for a reaction, FDA secretary general Eric Domingo said, “The FDA issues CSPs to specialty societies and institutions. In this case, it was granted to the PSG Hospital and they will report to FDA all the individuals that that get the vaccine and the outcomes.”

DOH Administrative Order No. 4 s. 1992, on “Compassionate Special Permit for Restricted Use of Unregistered Drug and Devices Product,” says the CSP is a “special permit signed by the FDA Director granting a Specialized Institution (SI) and Specialty Society (SS) the privilege to avail of an unregistered drug and device product through a certain licensed establishment for certain kind/type of patients, specific volume and period.”

Sen. Juan Edgardo Angara has filed a bill which seeks to exempt donations of COVID-19 vaccines and other critical supplies from taxes.

He said the measure will encourage more donors to provide vaccines, which will boost the country’s supply.

Senate Bill 2406 filed by Angara on Wednesday last week proposes that donation of drugs, vaccines, and medical supplies, specifically prescribed and directly used for COVID-19 will be exempted from donor’s tax.

Donations of drugs for the treatment of COVID-19 approved by the FDA for use in clinical trials, including raw materials needed for the production of these drugs, would also be exempted.

Angara, Senate committee on finance, said the grant of donor’s tax exemptions will be in effect from Jan. 1, 2021 to Dec. 31, 2023. All of the covered donations must be for the use of the government and private entities, not for commercial use and shall be for free distribution to or use for the containment or mitigation of COVID-19. – With Raymond Africa and Gerard Naval