AFTER two days of less than 2,000 cases, the Department of Health reported 2,261 new coronavirus disease (COVID-19) cases yesterday and 50 more deaths that raised the number of fatalities in the country to 6,497. 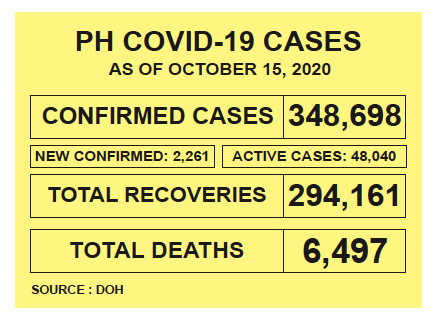 In its latest bulletin, the DOH said 566 of the new cases came from the National Capital Region while Cavite reported 174, Pangasinan 145, Northern Samar 104, and Quezon 98.

Majority of the new deaths also came from NCR with 14 while Western Visayas had 12.

There were 385 recoveries, meaning the number of survivors has risen to 294,161.

Twenty four more overseas Filipinos have been infected with the deadly virus, bringing the number to 11,141 in 81 countries, according to the Department of Foreign Affairs.

The DFA said there were no new deaths reported while there were three new recoveries, bringing the number of recoveries to 7,175. As of Wednesday, 811 overseas Filipinos have succumbed to the virus.

The Middle East and African regions registered the bulk of cases and deaths with 7, 364 and 529, respectively.

The Asia and Pacific regions have tallied 1, 755 cases and 9 deaths followed by Europe with 1,211 cases and 95 deaths. The Americas reported 811 cases and 178 deaths. – With Ashzel Hachero