FOR the second straight day, just over 2,000 new coronavirus disease (COVID-19) cases were reported by the Department of Health but the total number of infections, now totaling 326,833, remained the highest in Southeast Asia.

The number of deaths dove to 25, the lowest number of fatalities reported in 15 days, a development that the World Health Organization representative to the Philippines welcomed. 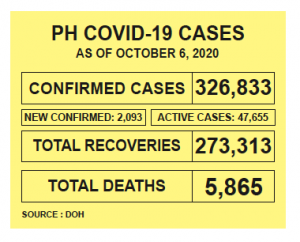 In a virtual press briefing, the WHO Representative to the Philippines, Dr. Rabindra Abeyasinghe, said there is still room for improvement in the country’s fight against the deadly virus.

“When we look closely at the situation in the Philippines, the Philippines has done a lot (of) those things. But there’s still room for improvement,” said Abeyasinghe.

“As the government continues to improve its response, there are now measures in place to strengthen these aspects and, we believe, that it is now contributing to the gradual decline in transmission,” he added.

In particular, he said the Philippines can still improve its early diagnosis, contact tracing, and management of positive individuals through early isolation and quarantining of close contacts.

“In the absence of the specific therapeutic agents or vaccines, we need to implement a comprehensive response,” he said. “Delays in doing these have resulted in more secondary cases happening and more secondary transmission occurring.”

On Monday, Health Secretary Francisco Duque III said the country is headed in the right direction in addressing the pandemic.

A day after it reported a spike in COVID cases among overseas Filipinos, the Department of Foreign Affairs yesterday reported just three new cases and one new fatality.

The number of Filipinos in 79 countries infected with the virus now stands at 10,843 and 799 deaths.

No new recoveries were reported though. As of Monday, the DFA reported 6,903 recoveries.

The three new cases came from the Asia Pacific region which now has 1,705 cases, second only to the Middle East and African regions which had 7,127 cases.

The Middle East and African regions also reported the highest number of fatalities at 517, followed by the Americas with 178, Europe with 95 and 9 in the Asia-Pacific region.

In another development, the city government of Manila started yesterday the free mass swab testing for tricycle drivers and some employees of the Manila Traffic Parking Bureau.
The swab testing operations was held at the Baseco Sports Complex in Tondo.

Manila Mayor Isko Moreno had earlier said public market and mall employees, hotel staff, restaurant workers and public utility vehicle drivers in the city will be covered by the free swab testing as part of the city’s “inclusive approach” in combating the virus.

This came after the city government opened another swab testing facility at the Ospital ng Sta. Ana with a capacity of at least 1, 000 tests daily. – With Ashzel Hachero