AT least 15 people, including seven soldiers and a female suicide bomber, died and scores were injured as twin explosions ripped through the town plaza of Jolo in Sulu yesterday noon.

Sawadjaan was able to escape pursuing Army intelligence personnel in June after policemen intercepted the soldiers at a checkpoint and subsequently shot them dead near a police station.

The first improvised explosive device was detonated at around 11:50 a.m. in front of the Paradise grocery store in Barangay Walled City.

Vinluan said the bomb was attached to a motorcycle which exploded immediately after its still unidentified driver left. The motorcycle was parked near a military truck loaded with soldiers on marketing duty.

Six soldiers and six civilians died in the first attack while 16 soldiers were injured.

The second explosion occurred about a hundred meters away, near a branch of the Development Bank of the Philippines (DBP), at around 1 p.m. 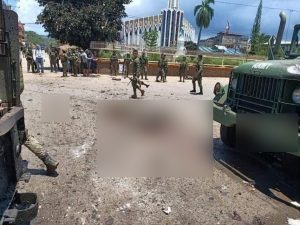 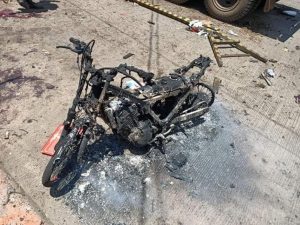 Vinluan said a soldier was “checking” on a woman when the bomb in her possession exploded.

The blast killed the still unidentified bomber, whose body was mangled; the soldier who was checking on her, and a policeman.

Lt. Col. Ronaldo Mateo, spokesman of the Army’s 11th Infantry Division, said seven soldiers, 11 civilians and the female bomber died in the two blasts. His figure on the injured is similar to that of Vinluan.

“The second explosion was perpetrated by a female suicide bomber. Troops were condoning the area when one of our men saw her. He checked and told her not to go inside. Then immediately after, she detonated the bomb on her body,” Mateo said.

Vinluan said “the area is now cordoned while we are running after the perpetrators.”

Mateo said the military has locked down Jolo town.

“Our security operations, both combat operations and intelligence operations, are ongoing to get the perpetrators,” said Mateo.

Vinluan said the military got intelligence reports as early as May that Mundi Sawadjaan’s group was planning two suicide bombings in Sulu. He is a nephew of another Abu Sayyaf sub-leader, Hatib Sawadjaan.

Vinluan said Mundi Sawadjaan was involved in the suicide bombings at the Mt. Carmel Cathedral in Jolo, Sulu in January last year that killed 23 people, including the Indonesian couple that carried out the attack, and wounded 109 others.

Sawadjaan was also behind the bombing at the headquarters of the Army’s 1st Brigade Combat Team in Indanan, Sulu in June last year that left seven people dead, including two suicide bombers.

“We’re running after him as early as May. But our troops were killed, they (soldiers) were targeting suicide bombers, including Mundi Sawadjaan,” Vinluan said.

Vinluan was referring to the killing of Maj. Marvin Indamog, Capt. Irwin Managuelod, Sgt. Jaime Velasco, and Cpl. Corporal Abdal Asula, who were tracking Abu Sayyaf bombers when they were accosted and killed by policemen in Jolo last June.

“He was our target but it (operation) did not succeed because of what happened,” Vinluan said of Sawadjaan.

Vinluan said the planned suicide bombing was called off after the plot was “exposed” in June. “They backed off, but made a plan again,” he said.

He said yesterday’s bombings would have not happened had the group of Indamog was able to arrest or neutralize the group of Sawadjaan in June.

Malacañang condemned the explosion incidents in Jolo and urged town residents to stay vigilant and report to authorities any suspicious personalities and unattended items in their areas.

“We condemn in the strongest possible terms the explosion incidents in Jolo, Sulu today, which left scores dead and wounded, including soldiers. We likewise condole with the families and loved ones of those who died in these tragic incidents,” presidential spokesman Harry Roque said.

Cabinet Secretary Karlo Nograles said: “These twin bombing incidents are tragic reminders that even in the midst of the greatest public health crisis of our generation, government must remain vigilant in the face of continuing threats to the security and safety of our people.”

“I join our people in grieving for the soldiers who lost their lives in service of the country, and in praying for the recovery of the soldiers and civilians injured in this inhuman attack,” he added.

Nograles stressed that the “government has always maintained a zero tolerance policy for terrorism and terrorism-related violence. Terrorism has no place in a civilized world, especially one dealing with a pandemic. But just as the government has marshaled all its resources to meet the threat posed by Covid-19, so shall it exert every effort to obtain justice for the victims of this senseless atrocity, and to hold those responsible for this crime accountable to the fullest extent of the law.” – With Jocelyn Montemayor