MORE than 1,000 new cases of the coronavirus disease (COVID-19) was reported by the Department of Health yesterday, along with 11 more deaths, as the deadly virus showed no signs of slowing down.

In its latest case bulletin, the DOH said the 1,392 new cases raised the country’s total to 58,850 while the number of fatalities rose to 1,614. The department also reported 17 new recoveries, meaning the number of survivors has risen to 20,976.

No new deaths were reported among overseas Filipinos yesterday, although 43 more were added to the list of those infected with the virus, the Department of Foreign Affairs said.

The DFA also reported 34 new recoveries in Europe and the Asia-Pacific region.

Overall, 8,915 Filipinos in 64 countries have been infected by the deadly virus, 5,311 have recovered, 618 have died while 2,986 are still undergoing treatment.

In the Asia-Pacific region, the numbers stand at 722 cases and five deaths.

The DOH also announced the approval of four additional subgroups to be included in the expanded COVID-19 testing guidelines of the country. In a virtual press briefing, DOH Undersecretary Maria Rosario Vergeire said Health Secretary Francisco Duque III has signed the order detailing the coverage of the expanded testing.

“Our daily testing capacity is already at 20,000, that’s why we decided to expand the testing coverage further,” Vergeire said.

Vergeire said the Research Institute for Tropical Medicine (RITM) has scaled down its operations as the national reference laboratory after one of its personnel tested positive for the deadly virus. She added that a couple of RITM’s laboratory machines have broken down.

She assured the public that RITM will continue to test COVID-19 samples but its testing will be temporarily be limited to those who are confined in their hospital facility. 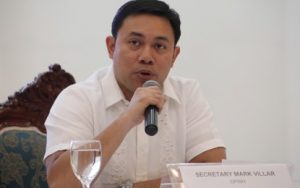 Public Works Secretary Mark Villar announced that he has tested positive for COVID-19, the third Cabinet official to get infected with the virus. The two others were Education Secretary Leonor Briones and Interior Secretary Eduardo Año.

Defense Secretary Delfin Lorenzana, who was exposed to a security officer who tested positive for the virus on his way to Jolo last Monday, announced that he has tested negative in his second test. When he was first exposed to several officials who were positive, Lorenzana had undergone self- quarantine.

The Department of Justice said an inmate and a staff member of the Bureau of Corrections remained on quarantine out of the more than 300 who were infected with COVID-19 since last March. – By Jocelyn Montemayor, Victor Reyes, Ashzel Hachero, and Christian Oineza
Justice Undersecretary Markk Perete said 323 inmates and BuCor personnel who were infected with the virus have recovered while 18, all inmates, succumbed to the virus.

Except for the two on quarantine, the BuCor has not reported any new infection.

The San Juan government assured residents who test positive for the virus that they will not spend a single centavo while they are quarantined in the city’s various facilities.

“They (patients) don’t have to worry about paying anything. Their only goal is to get better,” Mayor Francis Zamora said, adding those who are currently on home quarantine will receive P3,000 if they are transferred to a quarantine facility, among them the San Juan City Medical Center, Kalinga Center, and the San Juan national high school annex.