ONE hundred more deaths were reported by the Department of Health yesterday, raising the number of fatalities to 5,776, while there were 3,190 new coronavirus disease (COVID-19) cases, the highest increase in six days.

Majority of the new deaths were recorded in NCR with 36, and CALABARZON with 28. Other deaths were reported from Western Visayas (9), Central Visayas (7), and Bicol Region (5).

After five new cases were reported on Saturday, the Department of Foreign Affairs said it did not receive any reports about new COVID cases, fatalities or recoveries among members of the overseas Filipino community yesterday.

As of Saturday, October 3, the DFA said 10,549 Filipinos in 79 countries have been infected by the virus, with 6,750 having recovered.

There were also 793 deaths, 512 of them in the Middle East and African regions, 178 in the Americas, 95 in Europe and 8 in the Asia Pacific region.

The Presidential Communications Operations Office (PCOO) said it has recorded 152 confirmed infections in the department and attached agencies, with 34 of them active cases. There were 116 recoveries and three deaths. 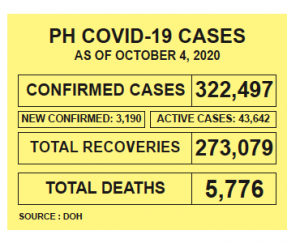 Over 200 cadets and personnel of the Philippine National Police Academy in Cavite who tested positive a few weeks ago have fully recovered.

In a radio interview, PNPA director Maj. Gen. Gilberto Cruz said the cadets and police personnel of the academy are now back to the status where they were prior to their infection.

“We have more than 200 plus cadets and 13 personnel who tested positive before but with God’s grace, we now have a zero case at the PNPA based on the recent testing we conducted,” said Cruz.

On September 14, the academy announced 232 cadets and 11 policemen at the academy have been infected with the virus based on swab tests. The number of infected police personnel later increased to 13.

Cruz said the PNPA has downsized the number of its COVID-19 facilities with the recovery of the cadets and personnel. Cruz said the facilities are currently housing several personnel who had close contact with people with COVID-19.

“They are actually negative but just to be sure, we have to monitor them,” he said.

As of Saturday night, 6,080 policemen have tested positive for the deadly virus with 4,970 recoveries and 17 deaths. – With Ashzel Hachero, Jocelyn Montemayor and Victor Reyes