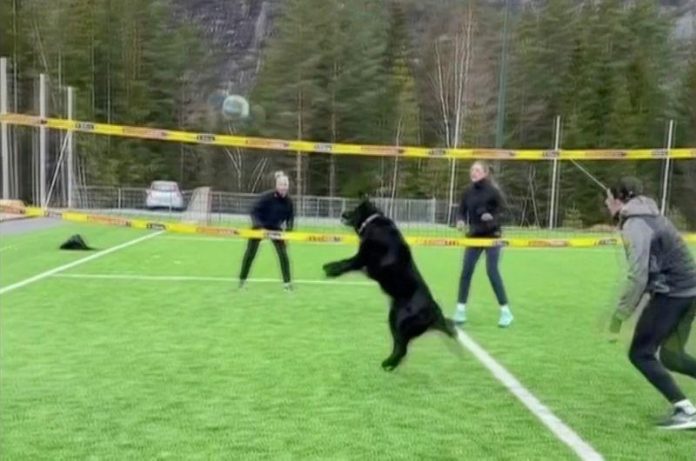 NEW YORK. – On a chilly afternoon in the quiet of lockdown life in Aamli, Norway, Kiara decided she would take a crack at volleyball.

Her first punt on the ball swung far to the right, forcing team mate Mathias Berntsen, a professional beach volleyball player and Olympic hopeful, to crane his arm backward and make contact.

Her second was perfect: dead centre with the right amount of elevation to allow Berntsen to unleash a cracking spike on his opponents.

That any novice could so quickly master the manoeuvre would be impressive – that Kiara did so despite being a 3-year-old Flat-Coated Retriever-Labrador mix was even more so.

“She just sort of found her own way to bounce the ball back,” Berntsen told Reuters, days after a video of the encounter went viral on social media, attracting more than 145,000 views on Instagram and an offer to audition for America’s Got Talent.

“I haven’t trained her in any specific way,” he said. “It’s kind of special – I don’t know how to explain it either.”

Berntsen, who now spends roughly three or four hours a day responding to the legions of media requests and fans, is among a growing group of professional athletes and commentators whose pets have grabbed the spotlight in life under quarantine.

With millions across the globe adopting social distancing measures, pets have emerged as a particular source of comfort, with adoptions surging in the U.S. and Britain.

When the BBC’s Andrew Cotter observed his dog Mabel slowly stealing a bone from her older counterpart last week, the veteran sports commentator was there to narrate the incident in a video that delighted more than half a million on Twitter.

“Some sports are slower,” he wrote. “More about the strategy.”

For Berntsen, whose goal to qualify for the Tokyo Games has been put on hold, Kiara’s companionship helps as he adjusts to a slower pace of life.

“She’s really loyal,” he said. “She loves cuddles – that’s like her main thing.”

Gov’t gross borrowings up 30% as of end Feb

Masters, history in the bag for Matsuyama?