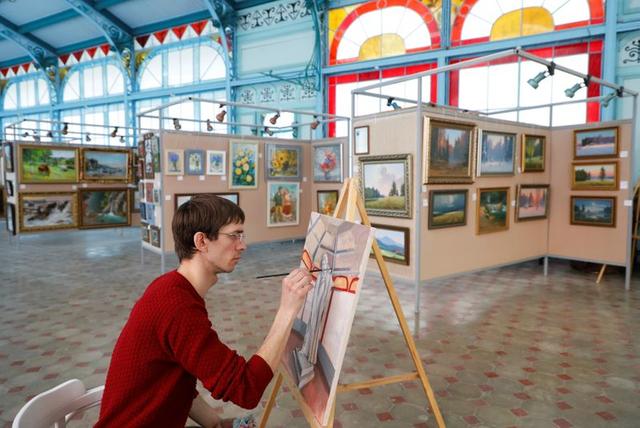 ZHELEZNOVODSK, Russia. – When an art gallery in southern Russia closed its doors to help curb the spread of the coronavirus, one artist asked to self-isolate there rather than leave his place of work.

Sergei Pronin had only just started work as an administrator at the Pushkin Gallery when the lockdown was imposed.

He was granted permission to stay and now paints, sleeps, cooks and exercises in the company of a sole companion – a canary named Hertz.

“I had an idea that it was interesting to work on a series of paintings about the Pushkin Gallery itself,” said Pronin, 31, who, since March 28, has spent his days creating art in the venue in Zheleznovodsk, in the Stavropol region.

He has finished painting a view of the gallery and is now working on a piece dedicated to poet Alexander Pushkin, after whom the gallery is named and whose sculpture features as a centrepiece of its main exhibition. 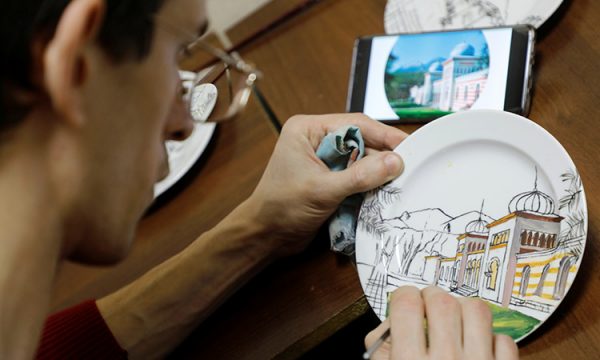 “In the near future I want to paint Isadora Duncan dancing on the stage in the Pushkin Gallery,” Pronin said, referring to the time the American dancer performed there in the early 1920s.

Pronin, who does daily aerobics and stretching in one of the gallery’s several rooms, said he planned to stay there for the duration of the lockdown, which is currently in place in Russia until April 30.

Museums and galleries have been among the many venues and businesses to close in an effort to contain the coronavirus, with 47,121 cases and 405 deaths reported in the country.

The domed gallery, which opened in 1902, operated as a military hospital for a brief period during World War Two and now houses paintings by local artists and has a stage for concerts and theatre performances.