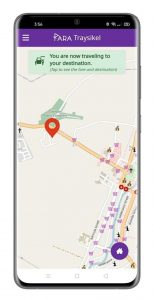 At a virtual conference, Gamaliel Taqued, PARA president and chief executive officer, said the app was launched as one of its developers Arvin Munar, PARA chief technology officer and executive vice president, is a child of a tricycle driver.

Taqued noted some of the advantages of the app: address the issue of colorum public utility vehicles, comply with transport fare matrix, increase revenue of drivers, ensure safety of riders and contact trace, among others.

With a few quick clicks in the app, users get to see the fixed fares (PARA Fare) before booking a tricycle ride (PARA Traysikel), and even ask drivers to buy necessities from a store for them (PARA Bili).

A dashboard management control is provided to local government units (LGUs) for instances when odd and even number coding is implemented among tricycles to track the days they are allowed to operate. This offers LGUs a system to help them regulate the tricycles in their areas.

PARA works with LGUs and other tricycle operators and drivers’ associations so that everyone, most especially the users, benefit from the innovative solution.

Due to limited transport options, an immediate dry run of the app was requested in the metro so that users can have a hassle-free commute and drivers are able to make ends meet.

Taqued said cashless payment may be adopted soon and that the company is looking for insurance to guarantee tricycle drivers’ protection.

He added that PARA plans to partner with a mobile brand, while several financial companies can help tricycle drivers purchase smartphones on installment to reap the benefits of the new app.

The company prioritizes the onboarding of tricycle drivers from different LGUs in Luzon, Metro Manila, Laguna, Batangas and eventually, across the country.

For his part, Pagsanjan Mayor Peter Casius Trinidad in Laguna said a thorough reorganization of various transport groups especially the operations of tricycles is needed to ensure the convenient and safe conduct of delivery of people, goods and services.

Trinidad added that a centralized system of set-controls and regulations is highly called for to make the transport sector more responsive to the needs of the town.

According to Taqued, there are approximately 4.5 million tricycles in the entire country and the company eyes to onboard 450,000 or 10 percent on the platform.

The company also encourages Cabanatuan City to try the app as the country’s tricycle capital has about 47,000 tricycles.

It now has about 10,000 downloads from App Store, Google Play and App Gallery. It will also be adopted in Nigeria this mid-April.

Japan wholesale prices up for first time in 13 mos

‘Rody does not have to prove he’s working’