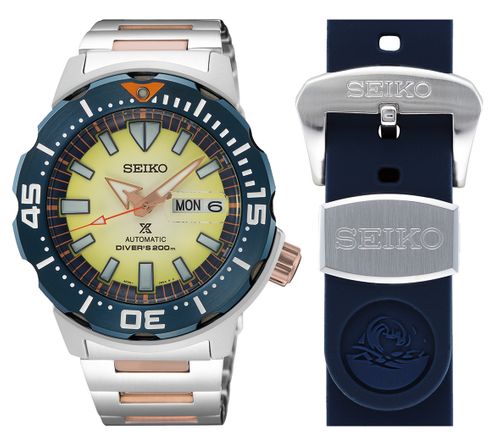 SEIKO, the world-leading watchmaker, recently unveiled its first Philippine-edition Prospex watch inspired by the world-famous Tubbataha Reefs in commemoration of its 55th anniversary.

Power reserve is approximately 41 hours and is water resistant up to 200m. It comes with a day/date display and stop second hand function, as well as LumiBrite on hands and indexes sitting atop a Blue IP dial and Yellow gradation dial.

It comes with a two-tone stainless steel band with an extra silicone blue band that will be placed inside a special box with engraving of limited edition numbers and the words “PHILIPPINE LIMTED EDITION.”

“This is a very big moment for us because it’s closer to home and we can’t wait to hear about your adventures with this new timepiece,” said Karl Dy, president of Timeplus, the official distributor of Seiko in the Philippines. “Seiko’s pursuit for innovation and technology continues in the Philippines, specifically in the Sulu Sea where one of the most diverse marine ecological systems in the world is located.”

The company has reached another milestone this year as it brings together heritage, magnificence, and adventure in a timepiece like no other with the first Philippine-edition Prospex watch.