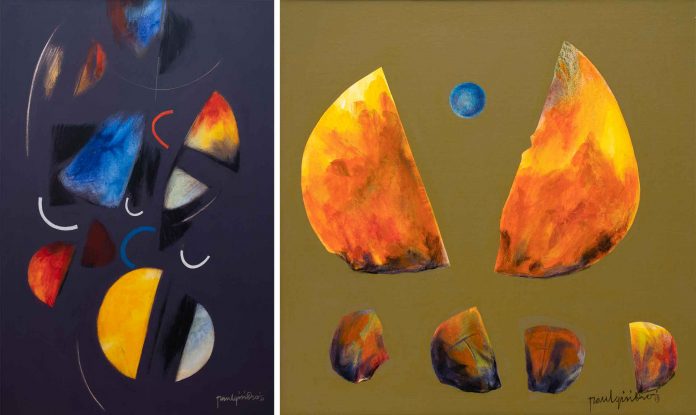 Color harmony is a core instinct for Isidro. The Philippine landscape, with its atmosphere and unified light, is an ideal subject with which he pursues his interest. For “The Natural State of Being”, the artist expresses a tradition of respect for the healing power of nature.

Isidro intends to investigate humanity’s valuable and fundamental relationship to the natural world as detailed in the exquisite brushstrokes and delicate layering of his chosen medium.

The works for “The Natural State of Being” are composed of the Philippines’ topographic formations depicting life forms with its intricate crystalline symmetry. Isidro’s art continues to express his dedication to a healthy ecosystem and humanity’s intrinsic connection to nature. Practicing rigorous essentialism, he works to reveal the divine concealed within the ordinary. This requires slowing down, maintaining awareness and paying close attention to details.

Serendipity and chance are essential to Isidro’s work; as he explores and examines the tension between chaos and order. This process actively connects him with his environment, his existence, his reality.

Isidro’s art recalls a place to the viewer, evoking a sublime reality from the depths of memory and recollection. The artist believes in the need to integrate man’s relationship with nature as we have done so readily with technology. For him, these are responsibilities that accompany life, both in art and in the natural world.

Even with more than a hundred solo and group exhibits held in the country and in major cities in the U.S., Israel, India, Indonesia, Spain, West Germany, France, the Netherlands, Hong Kong, China and Singapore, Isidro remains the same dedicated artist as he was from the beginning.

“The Natural State of Being” by Raul Isidro will be on view from March 2 to 14. Galerie Joaquin is located on the 3rd level of The Podium, ADB Avenue, Ortigas Center, Mandaluyong City.

AstraZeneca says it had positive meeting with EU over vaccine row

Prime Certification and Inspection is recognized as PH halal-certifying...