A survey done by the Social Weather Stations shows that one out of five or 21 percent of working Filipinos lost their jobs due to the pandemic. And with more than 400,000 positive cases of COVID-19 in the country as of early November plus a string of deadly typhoons, many Filipinos have understandably been hard-pressed finding reasons to celebrate Christmas this year. But the chilly air alongside yuletide rituals with which we welcome the season still offer people some comfort, hope, and joy.

Coca-Cola continues to serve its mission of uplifting spirits and bringing people together. The brand seeks to spark a sense of togetherness and kindle a renewed hope for brighter days ahead. 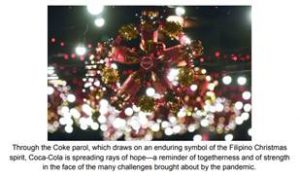 The Philippines has over a million sari-sari stores nationwide, one in almost every corner of the community—and they have been one of the hardest-hit industries this 2020. According to a survey conducted by the Philippine Association of Sari-Sari Store and Carinderia Owners (PASCO), 42% of sari-sari stores and 75% of carinderias were forced to close during the hard lockdown, while others have had to drastically downsize their operations by as much as 90%. 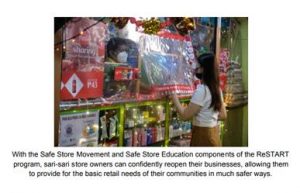 At the height of the pandemic, Coca-Cola Philippines saw this as an opportunity to help bring the light back for these micro-retailers in order to help them recover. In partnership with the Department of Trade and Industry (DTI) and other agencies, the Rebuilding Sari-Sari Stores Through Access to Resources and Trade (ReSTART) Program was launched. 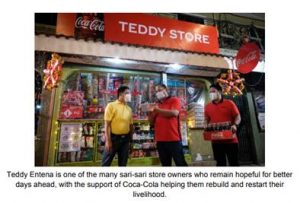 “We want to create programs that will allow our partners to recover and restart their livelihoods in light of the challenges they’ve had to face, and which will give them ample support as they pursue future ventures,” said Jonah De Lumen-Pernia, Coca-Cola Philippines Director of Public Affairs and Sustainability. “By helping out micro-entrepreneurs, who are such an integral part of the Filipino way of life, we’re contributing to building stronger communities.”

With a Php 157-million support fund, the ReSTART Program is designed to help over 15,000 micro-retailers to reopen safely and confidently. The program also prepares these micro-retailers to operate and sustain their livelihood in the new normal, through online training and resources as well as advocating for safe stores to meet safety and health protocol requirements.

Coca-Cola Beverages Philippines, Inc. (CCBPI), the bottling arm of Coca-Cola in the country, has also recently partnered with the Philippine Disaster Resilience Foundation (PDRF) to help 400 COVID-affected sari-sari store owners by providing them with retailer packs worth Php 10,000―Php 3,000 of which are Coca-Cola products

With more than 285,000 overseas Filipino workers unexpectedly and suddenly repatriated, and unsure of what future awaits them here, Coca-Cola, DOLE-OWWA, NCRO, TESDA, and DTI partnered to deliver the OFW Reintegration through Skills and Entrepreneurship (OFW RISE) Program.

De Lumen-Pernia shares, “Forced to return to the Philippines because of the pandemic, our balikbayans need support to help them restart in the country. We recognize that most of them want to establish their own businesses—to thrive here at home and continue fulfilling their dreams, but this time, in the company of their families. We would be able to help them do so through the OFW RISE program, especially given the multi-stakeholder collaboration that made it possible.”

Coca-Cola has also intensified its Balik-Pinas program at the national level, expanding its scale and coverage this year to reach more OFWs whose livelihoods have been affected by the pandemic. With the initiative, the Company has been lending training and assistance to former OFWs seeking to become business owners as Coca-Cola distributors or wholesalers.

“The difficulty of this year cannot be understated and we at Coca-Cola want to help ensure that Filipinos can face the future on steadier footing. This is why we’ve continued and intensified investments in the country and have launched initiatives like Balik Pinas for returning OFWs. Coca-Cola will continue to support and contribute to the country’s recovery,” says Gareth McGeown, President and CEO of CCBPI.

For Christmas, Coca-Cola shares a hope with every Filipino: that each and every one of us continues to be with our truest and brightest lights—family, friends, loved ones—in this holiday season and beyond.