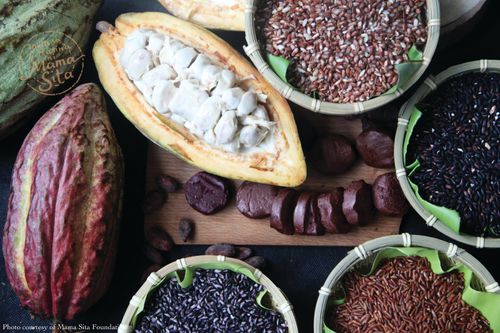 The Cordillera Rice Terraces are a sight to behold; cascading steps of rice paddies—seemingly carved into the mountain slopes—inspire wonder and amazement at the capabilities of human creativity. For generations, the upland farming communities have lived their lives punctuated by the rhythm of the rice: they mark the years in sowing and harvesting, as well as in celebrating feasts. It’s the celebration of a sustainable and simple rural livelihood.

Legend spoke of heirloom rice as a gift by the deities, and these require a certain vigilance to cultivate. They can only grow in the conditions developed from many years of reaping and sowing, which is perhaps why the agriculture behind it is steeped in the people’s folk practices; from rituals for preparing the soil, to the harvest feasts. At first glance, the heirloom rice varieties come in a range of colors, from deep purple to rust red, and have a pleasant bite. Barely milled to show off the color of the bran and keep the nuttiness of flavor, they are commonly used to make rice wine (tapuy) and kakanin desserts. But nutritionally and gustatorily speaking, a deeper examination proves the virtue of these grains.

Balatinaw is grown in Bauko, Mountain Province and has a deep purple grain with a delightful fruity flavor and chewy texture. It’s often used in making tapuy, but it can be cooked into kakanin as well. Balatinaw has many micronutrients, more than commercial rice (here meaning jasmine rice, IR 64, and azucena). It contains three times more iron and four times more calcium than jasmine rice. It has twice the amount of zinc in IR 64, and thrice the amount of potassium in azucena rice.

Minaangan is a rust-red rice that has an earthy, somewhat nutty flavor and a pleasant bite. The rice is often served in the homes of the farmers in the municipalities of Banaue, Hingnon, and Hungduan in Ifugao. Minaangan contains thrice as much manganese and twice as much phosphorus as IR 64 and azucena rice. It has three times more iron than commercial rice. 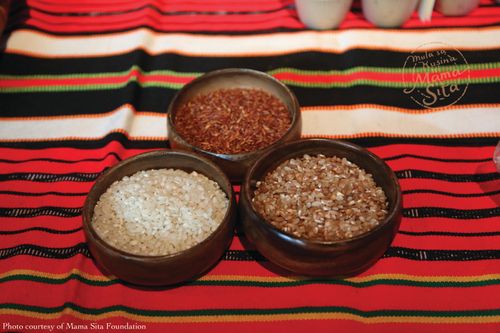 Ominio comes from Ifugao and Mountain Province. It is related to balatinaw, but has come to be differentiated by the stickiness of the grain. It is more of a glutinous rice used for rice desserts. Its pleasant bite and fruity flavor go well with a delicious aroma, making it harder to grow these grains without constant vigilance to keep animals from eating them before they are ripe for the harvest. Like the other varieties of heirloom rice, ominio is rich in micronutrients, possessing twice the amount of manganese in azucena rice, three times the calcium of commercial rice, three times the potassium, phosphorus, and manganese of IR 64, and four times the iron in jasmine rice.

Folks in the upland communities prefer to mill their rice minimally, meaning they only remove the husk, but keep the bran and germ intact. Not only does this preserve the unique flavor of the grains, but it also retains beneficial micronutrients, mostly concentrated in the rice bran and germ.

With flavor and nutrition as top reasons for preserving and promoting the heirloom rice varieties in the north, the Mama Sita Foundation set up Mama Sita’s Heirloom Grains Project. The project seeks to find ways to make heirloom grains more accessible to the regular consumer, helping them to appreciate the flavors that have been passed on for generations up in the mountainous Cordilleras. The project also seeks to support the upland farmers in keeping their livelihood sustainable.

One of the ways to promote heirloom rice is to create a need for these precious grains by combining them with a local favorite. Mama Sita’s Heirloom Rice Champorado in Balatinaw, Minaangan, and Ominio variants makes heirloom rice a key ingredient to a favorite dish, the chocolate porridge champorado. 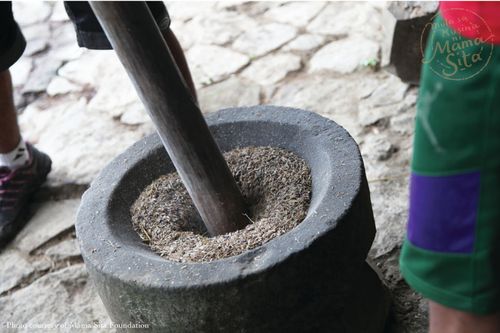 Combining the rice with pure cacao tablea from Mindanao and sugar from Negros, the project is able to create a product that brings together the richness of harvests from the three major island groups in the Philippines. The heirloom rice champorado is a Filipino artisanal product to be truly proud of.

The Mama Sita Foundation is constantly looking for ways to bring Filipino culinary heritage to the fore. Through the Heirloom Grains Project, the foundation advocates the preservation of the upland rice varieties and to keep the culture that maintains them sustainable. At the same time, it’s a great way to raise awareness, not only in word but also in each satisfying spoonful.

The Mama Sita’s Heirloom Rice Champorado is available in all variants in retail outlets online for Metro Manila customers.