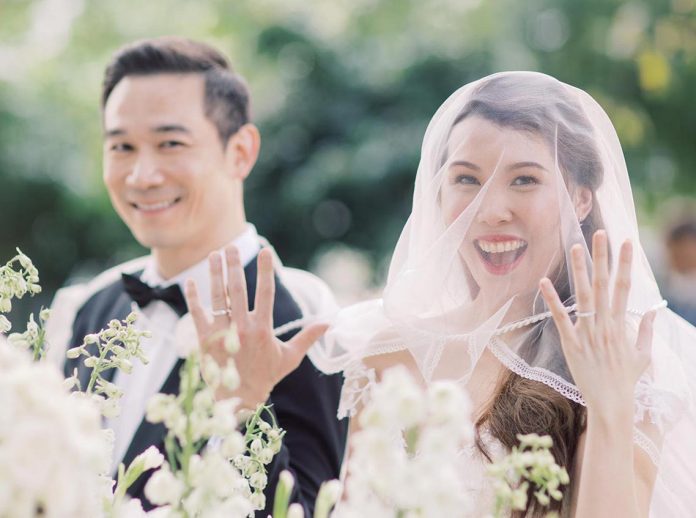 BY EDISON JOSEPH GONZALES
(As narrated by the newlyweds)

ERIC Charles Sy Uy and Reena Ritz Tee-Uy never lived in the same city so visiting each other over the weekend involved long flights between Guam, Hong Kong, and Manila. 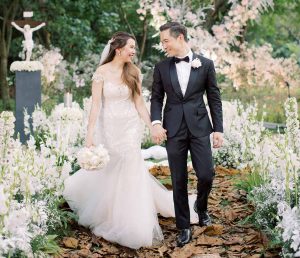 Regular Skype calls and messages always kept them connected and they never missed an opportunity to say good night to each other at the end of every day.

Since they were apart, trust was really an integral part of their relationship. After over eight years, Eric and Reena knew they eventually needed to close that gap and be together in one city. They were happy that it led towards marriage.

It all started when Eric, SM Hotels and Conventions Corp. vice president for technical services, and Reena, a former hotelier who worked for Shangri-La Hotels for more than 10 years with experiences in Maldives, Singapore and Hong Kong, went on a holiday to Munich to meet with Eric’s friends last November 2019.

Charles Uy and Elizabeth Sy’s son, who spent most of his childhood in Germany, wanted to bring Gerry Tee and Delfina Tee’s daughter, who was the area digital marketing manager for Shangri-La Group in Hong Kong before returning to Manila, back to the place where he had so many fond memories growing up.

Since it was just the start of winter, Eric thought it would be nice to go to Garmisch-Partenkirchen, a quaint ski town in Bavaria, where they stayed for a few days. They also went up to Mt. Zugspitze, Germany’s highest mountain, a day before their flight out, and then Eric got down on one knee and proposed.

Reena, who currently does digital marketing consulting for small and medium businesses and start-ups in Manila, was quite literally on top of the world as she knew it meant they would finally be together very soon.

Wedding plans were drawn up soon after in late 2019. Eric and Reena both loved to travel all over but the south of France had always been special for them. For Reena, it was the long, winding road trips through mountain passes and endless sceneries while Eric took her to places he knew from his backpacking adventures as a teenager. 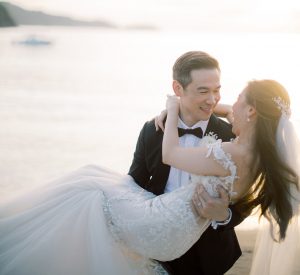 Naturally, their wedding had to reflect all these so they selected a beautiful chateau surrounded by sprawling vineyards as a backdrop to an event attended by their closest family and friends.

Everything was planned to the last detail – from the menu and the cutlery, to the wine and the weather, but who would have ever anticipated a lockdown just weeks before their initial trip to meet the wedding planner in the Provence?

Both Eric and Reena made light of the situation believing it would be like SARS some 20 years ago, so they were optimistic things would run its course. Reena had more time to choose wedding dresses while Eric was eagerly scouting possible venues for his bachelor party.

As the weeks tick by and key travel dates pass unfulfilled, it became obvious that the novel coronavirus was different. By then, all travel between Hong Kong and Manila came to a grinding halt and so like the “corona brides” out there, Reena gave up on wedding planning altogether. 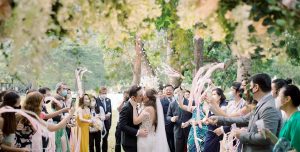 Soon it was September and as their original wedding day loomed, Eric and Reena decided one evening to be as spontaneous as the events unfold. They had no idea how long this pandemic would last or when they would next meet again.

An hour into the Skype date, they had a wedding date and the determination to get married even if it meant “just the two of us.” Soon after, as Reena stood in her empty apartment for the last time, she realized that the end of her nine-year adventure in Hong Kong would be the start of a new life with Eric back in Manila.

Since they couldn’t travel, they recreated the charms of a cozy outdoor Provencal wedding in Manila. Reena always envisioned her wedding in a beautiful garden setting like in one of her favorite classic English literature The Secret Garden by Frances Hodgson Burnett. 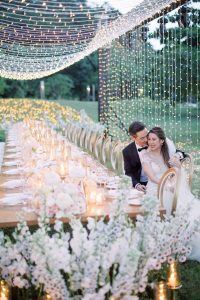 It had to have wide open spaces, fresh air, and fairy lights to mimic the clear night skies they have grown to love about Europe.

The wedding day was set on December 8 which was not only an auspicious date but also meant that they had to pull it all off in just three weeks from the time Reena lands.

Reena was lucky to have a very detail-oriented wedding planner who was her former colleague, as well as a very helpful events team headed by Frances Duque at Pico Sands Hotel who helped her plan this intimate event.

As the venue and flowers were being set up at Pico de Loro Beach and Country Club in Batangas, guests started to trickle in. Stylists were busy with Reena and her guests, COVID-19 tests administered on the spot, and everything was humming with busy anticipation. Eric and Reena were excited despite the weather forecast that predicted a 60 percent chance of rain.

Pico de Loro has a beautiful wide, open garden area by the beach – a perfect backdrop for this type of set up. The couple loved how Gideon Hermosa turned the area into a gorgeous secret garden with white and pink faunas growing from the main tree as their center point and the rustic autumnal walkway.

The reception was equally stunning with an elegant table cape donned with soft feminine flowers and a mesmerizing ceiling of string lights. It was perfect and everything the couple wanted.

True to their commitment to spontaneity, there was not a plan B. The groom and the bride have put their faith – and flowers – outside with nothing between them and the skies. 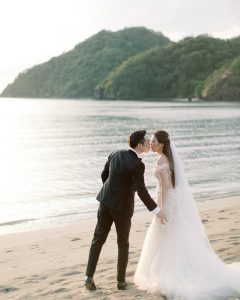 Have they come this far, beating all the odds, only to be soaked on one of the most important days of their lives? It did not help that there was a massive downpour just minutes before Eric was to be walked down the aisle and finally a drizzle just as Reena arrived herself.

Standing at the altar, Eric later told Reena that he was counting the sound of raindrops falling on the leaves, unsure of whether or not he should make a run for it. From the rain, that is.

Not a single drop fell during the ceremony and all the jitters they had just melted away as the setting sun cast a warm glow over the venue. Right after the wedding, the groom and the bride were treated to a most spectacular sunset as if to reward them for having faith even in the most unusual times. 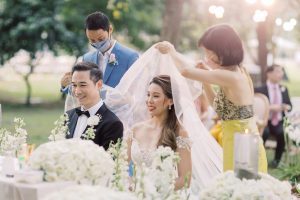 It is not exactly the ideal time to get married, that is why they were very mindful of the health and safety of all their guests. Eric and Reena made sure that everyone, including their suppliers, was tested onsite on the day of the event and kept their guest count minimal.

Rather than setting up a virtual wedding, they wanted this once-in-a-lifetime event to be special and celebrate it in the presence of their families.

Eric and Reena hope to be able to travel again so they could have their honeymoon and continue with their second celebration with friends. But at this point, they are just happy to be together.

‘Auto workers have every right to seek protection’

Luis takes over hosting duties on ‘Your Face Sounds Familiar’