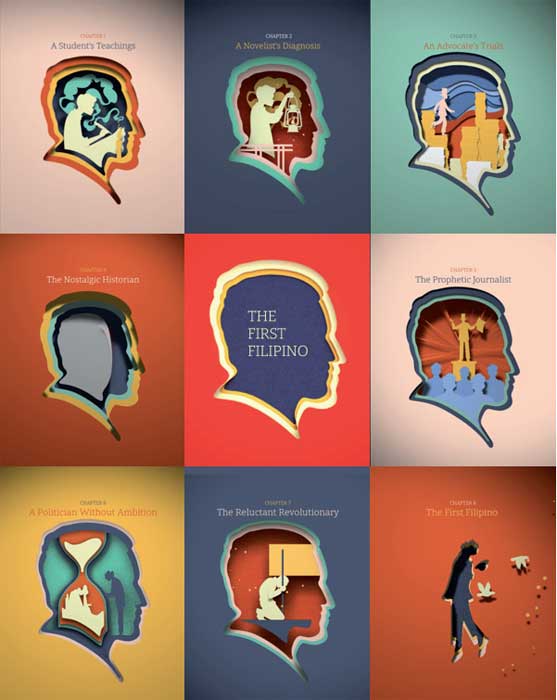 Amid the changes happening in the Philippines, one constant is our esteem for our national hero, Jose Rizal. Students are familiar with another name when discussing Rizal, though, and that is Leon Ma. Guerrero III, famous for translating Rizal’s two most famous works into English.

Guerrero also wrote a biography on Rizal, The First Filipino, which won the centennial biography award at the José Rizal National Centennial Commission. The biography is widely regarded as the definitive biography of the Philippine National Hero.

This year, Anvil Publishing has released a new edition of the book, updated with a new cover and a tighter typeface, making the paperback 384 pages. The release of the new edition was bolstered by a social media campaign led by BBDO Guerrero, who presented eight chapters from the book with a bold, dynamic design developed in partnership with Acid House and Syn.

“If Filipinos read more about the national hero, they would not only get to know Rizal, but understand themselves better,” Ocampo says. “I first read The First Filipino in college, and have since turned to The First Filipino time and again if only to help me separate historical truth from hagiography and see the ‘real’ Rizal emerge from the one cloaked in myth.”

“Rizal said, ‘Ang hindi marunong lumingon sa pinangalingan ay hindi makakarating sa paroroonan.’ (“He who does not know how to look back at where he came from will never get to his destination.”) We took that to heart when we developed this campaign; we wanted to make Rizal’s life and insights accessible to a new generation.” said David Guerrero, BBDO Guerrero Creative Chairman.

“This was a very personal project for me as it was about preserving and sharing my father’s work, and we wanted to make a campaign that could be easily shared and understood by numerous audiences. Now that we’re moving to distance learning, we believe that these videos are a great resource to augment discussions on Rizal,” Guerrero adds.