By Gus Trompiz and Clotaire Achi

RUNGIS, France. – Business is stirring at a giant wholesale produce market near Paris after France loosened coronavirus containment measures this week, but food firms are waiting for restaurant and hotel trade to return before celebrating.

The easing of France’s lockdown, one of the strictest in Europe, has brought some workers back to their jobs and seen the reopening of street markets that usually absorb part of the fresh produce channelled through the 234-hectare Rungis hub just south of the capital.

Masks must be worn, touching the produce is banned and the wholesale market’s usually bustling cafes serve take-away only. 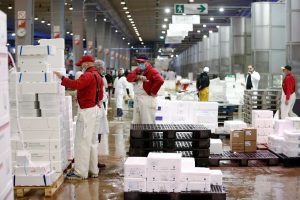 “This week is thankfully a week in which our business has picked up,” Veronique Gillardeau, owner of seafood wholesaler Maison Blanc, said as Friday’s trade wound down before dawn in the fish hall at Rungis.

“You usually have people greeting each other, meeting up at the cafe, there’s a special middle-of-the-night atmosphere here,” Gillardeau said. “All that side we’re having to forget.”

Wholesalers said supply snags or a switch to French produce from usual origins such as Spain caused price spikes in produce such as strawberries and asparagus.

Some at Rungis eked back sales by offering new products and services.

Meat and poultry suppliers say they have fallen back on butcher shops and provided more elaborate cuts as households have taken to home cooking. Some fruit and vegetable firms have teamed up with a home delivery service launched by Rungis to fill part of the gap left by restaurants.

The resumption of street markets in and around Paris has helped suppliers. 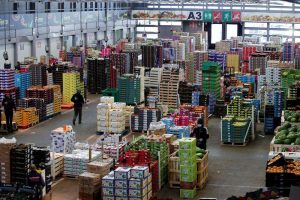 “We haven’t clawed everything back yet but it’s going much better,” Bruno Courillon, head of poultry wholesaler Eurovolaille, said, after losing up to 30% of his usual sales during the lockdown.

Cedric Gidel, a customer of Eurovolaille who runs a poultry stand at the Aligre food market in eastern Paris, said he was back at his old spot this week, although social distancing measures meant footfall at the market was down by half.

The closure until at least June of restaurants and hotels remains a cloud over Rungis.

The French fish sector is reliant on restaurants for over half of its volumes. At Rungis, 45% of all firms are to some extent dependent on restaurant trade, said Stephane Layani, CEO of Semmaris, the company that manages the wholesale hub.

“I am very worried,” he said from his office overlooking the complex.

“The restaurant and hotel sectors are going to be helped but those further up the chain shouldn’t be forgotten,” he said, after the government announced measures to support its tourism sector.

“You can’t say activity is like it was before COVID. As long as the restaurants are shut, it’s going to be tough for us,” said Gillardeau.