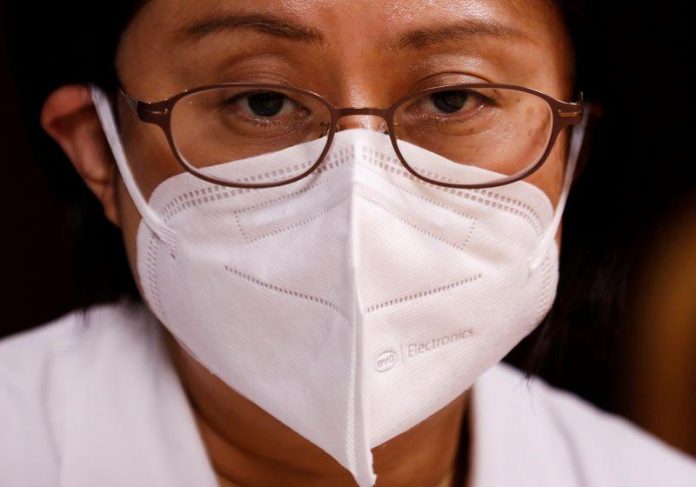 TOKYO. – At any given time, seven out of eight beds in the intensive care unit of St. Luke’s International Hospital in Tokyo are taken up by critically ill coronavirus patients.

“If we max out eight beds we can’t place patients who suddenly take a turn for the worse, so we always keep one bed open,” said Fumie Sakamoto, who manages the 500-room hospital’s infection control division.

The extra ICU bed also needs to stay open for any coronavirus patients who could arrive at any hour of the day in an ambulance, Sakamoto said.

“Our ICU is now really only for COVID patients,” she said.

As the number of confirmed coronavirus cases in Japan tops 12,000, hospitals like St. Luke’s are saving their limited ICU capacity for an increasing number of critically ill patients and improvising makeshift gear to protect frontline medical staff.

With some hospitals reluctant to take in COVID-19 patients, the most critical cases are transferred to willing hospitals like St. Luke’s, which are already inundated.

St. Luke’s has a special designation as a facility for infectious diseases and so receives government subsidies to take in infectious cases.

The pandemic has posed particular challenges in Japan where authorities are not legally empowered to enforce strict lockdowns like in other countries nor penalize businesses or individuals for not following isolation guidelines.

Although the government declared a nationwide state of emergency this month, it is unable to compel most hospitals to take in patients.

Japan is also in the same scramble for protective gear and medical equipment seen in many countries around the world.

Some doctors and other experts say there has been a failure by the central and some local governments to provide adequate financial assistance and protective gear to hospitals and medical staff. 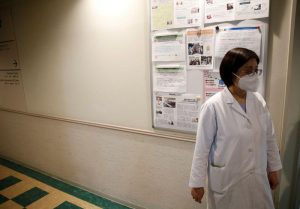 “We do not have a legal tool to force (hospitals to take patients), but even if we did, I don’t think we should make such a request to hospitals that are not prepared for infectious diseases,” said Yoshiyuki Sugishita, a senior official handling the coronavirus response at the Tokyo metropolitan government.

He said Tokyo had set up an online database this month where hospitals and public health centers can update the number of coronavirus cases they have admitted on a voluntary basis.

Nearly 1,500 patients and medical professionals have either contracted COVID-19 inside healthcare facilities or have tested positive while working or staying at such institutions, according to a Reuters analysis of domestic news reports, as well as public disclosures by institutions and independent research by the Tokyo-based Medical Governance Research Institute.

Such outbreaks have prompted hospitals to suspend medical services, including non-urgent surgeries and outpatient care.

“At this moment, private and some public hospitals can and do reject corona patients in critical condition,” said an ICU doctor at a large hospital in western Japan who declined to give his name because he was not permitted to speak to the media.

The doctor, who treats coronavirus patients, said many hospitals rely on routine surgeries and short hospital stays for their revenue and cannot afford to shut down those services.

The Japanese Society of Intensive Care Medicine, which has more than 10,000 members working in ICUs nationwide, estimates that the number of critical coronavirus patients has doubled in the past two weeks.

According to the same group, Japan has fewer ICU beds per 100,000 people compared to many other countries including Germany and Italy. It is possible to convert other hospital beds to those for critical patients, but staff in these units needed immediate reinforcement, they said.

In one of the worst examples seen so far, the ICU doctor said a coronavirus patient in his 80s had to be transferred more than 350 kilometers (220 miles) from his hometown to a hospital in Tokyo after he was repeatedly turned away by nearby hospitals. The man later died, far from his family, in Tokyo.

“Even if we decide among ourselves that we could take in a patient, when we report it up it can get shot down by the head of the hospital,” he said, adding most hospitals taking in COVID-19 patients were doing so amid financial losses.

In March, there were 931 cases in which emergency patients were rejected by five different hospitals or waited more than 20 minutes to find an emergency room in Tokyo, up by a third from a year ago, according to the metropolitan government.

In response to concerns by medical professionals, Japan’s health ministry has allocated 149 billion yen ($1.38 billion) in its supplementary budget to support medical facilities, including covering costs related to dispatching doctors and nurses to hospitals.

Shiho Shimada, an official in the health ministry’s coronavirus taskforce, said the additional budget would be used to secure beds in hotels for nurses and doctors and to buy equipment.

However, there were no measures aimed at helping hospitals that are forced to shut down some of their normal functions after taking in coronavirus patients, she said.

Rather, officials at the health ministry pointed to the doubling of the daily rates hospitals would receive for caring for coronavirus patients in intensive care units and said those should go a long way in helping hospitals.

In an interview with Reuters, Aichi governor Hideaki Ohmura said the central government needed to do more to assist hospitals. Ohmura announced this month that the prefecture will provide between 1 million and 4 million yen per patient in subsidies to hospitals that have taken in coronavirus cases since late January.

“The government’s plans to double the hospitalization costs is nowhere near enough,” said Ohmura.

Like its counterparts around the world, Japan’s health ministry is racing to supply hospitals with the necessary equipment.

Officials say they are trying to supply 100 million surgical masks to hospitals every month, a quarter of what the Japan Medical Association says its members need.

Tired of waiting on the government, Noboru Hagino, a specialist in rheumatology in a prefecture east of Tokyo, has been working with three others to scour the country for masks, asking for donations from individuals and businesses.

“Health ministry officials are too slow,” said Hagino, but added that they didn’t have the time amid the coronavirus outbreak to fundamentally fix the problem.

Other hospitals are testing whether face shields can be made using 3D printers or by taping together clear files.

“Compared to surgical masks, we hear that there’s an even bigger shortage of N95s,” said Takashi Chida, an official at the health ministry in charge of procuring supplies. He said there were no figures yet he could provide on the supply of heavy duty N95 masks, which are essential for protecting healthcare workers from contagion

As for protective gowns, Chida said there was a “3 million gap” between the current state of supply and demand.

At St. Luke’s Hospital, Sakamoto said the staff were gearing up for a long fight.

“Hospitals cannot survive by relying on medical staff’s sacrifice and good will,” she said.