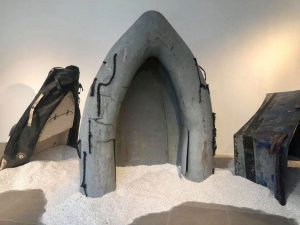 The history of the Philippines is marked with tradeoffs with colonizers and the big imperial powers like Spain and the US. The Pact of Biak na Bato, for instance, was an agreement between colonial Spanish Governor-General Primo de Rivera and Gen. Emilio Aguinaldo, who represented the Filipino revolutionaries, for a negotiated surrender of the revolutionaries in exchange for amnesty and a monetary indemnity of 400,000 pesos in December of 1897.

In 1898, after Aguinaldo was hoodwinked by American officials into thinking that they were not interested in the Philippine Islands, there came the Treaty of Paris under which the US bought the country from Spain for $20 million. It officially ended the Spanish-American War, but then lead to the Philippine-American War.

During “the bloody blundering business” — as one documentary film described the Philippine-American War — Filipinos suffered from the killing spree of American soldiers trying to keep their hold on their newfound colony.

In contemporary times, artist Pete Jimenez made a remarkable artistic statement by describing his installation works as “Islands for Sale.” These are 1960s boats made from decommissioned rescue boats of the Philippine Navy — outworn, dysfunctional vessels from the military point of view that are meant for the junkyard. Donations from the US, which in many cases the American military already considered as junk. But they gave them away to allies like the Philippines, as part of the Mutual Defense Pact.

Jimenez describes these boats with metaphorical passion as islands, their usefulness expired mainly due to obsolescence.

A very resourceful artist, Jimenez cut the eight boats into halves, placing some of them right side up and some upside down. They look like submerged boats, giving you the feeling of seeing the aftermath of a war, where things were scattered all over. At the same time, you can think of them as representing the contested Spratly Islands floating in the sea.

China, the emerging power, has been working hard to win over the country’s leaders. This has caused concern among various sectors as there have been Chinese encroachments in the Philippine economic zone in the West Philippine Sea. Are we to witness another tradeoff? Or a sell-off? Are the islands for sale?

Jimenez has been a garbage hunter, if you will, for decades now. As the cliche goes “one man’s trash is another man’s treasure. ” This installation is a huge operation. While randomly selecting used material from junkyard, he had to have a gut feel on which items to choose — although a creative mind like his no doubt already had an idea on how to tackle plethora of things that could used to interplay with each other to depict a huge creative concept. The discovery of materials came before the formulation of the concept.I would think this was the case in the Jimenez installation at the Ateneo Art Gallery.

He gave new life to scrap material by reconfiguring their creative potential into a platform of expressing a political opinion. Incidentally, the donated rescue boats were supposed to be used for military defense operations, but their usefulness was overturned by their obsolescence. We just hope that there were no accidents like drowning during their use as rescue boats, just like what happened to Huey helicopters donated by US Army to the Armed Forces of the Philippines, which were like flying coffins due to many accidents while they were in operation.

“Islands for Sale” as a thematic expression is very timely. Known for his satirical approach to many of his assemblage and sculptural oeuvres out of found materials in junkyards, Pete has come up with a very timely installation in these troubled times amid the COVID-19 pandemic and the virtual sellout of our sovereignty in the West Philippine Sea.

Pete Jimenez has done his share in fulfilling his duties not only as a citizen but as an artist to make a difference.