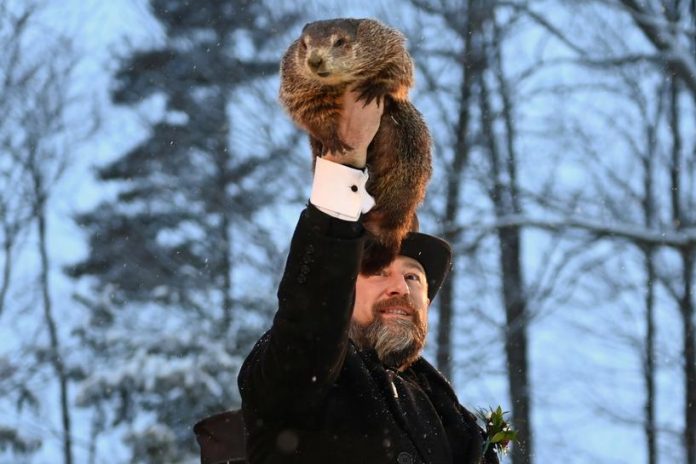 Pennsylvania’s most famous groundhog emerged from his tree stump in a light snowfall on Tuesday to predict another six weeks of winter, just as the northeastern United States got blanketed with its second day of snow.

After a year-long pandemic in which every day has seemed like the previous one, not unlike the 1993 movie “Groundhog Day”, Punxsutawney Phil emerged at dawn, saw his shadow and decided to wait it out for another six weeks, his handlers said.

“Now, when I turn to see, there’s a perfect shadow cast of me, six more weeks of winter there will be,” the Punxsutawney Groundhog Club reported after its president and groundhog interpreter, Jeff Lundy, determined Phil’s prediction.

Every Feb. 2 is known as Groundhog Day. But the club’s annual ritual this year in Punxsutawney, Pennsylvania – about 75 miles (121 km) northeast of Pittsburgh – was different than the 134 that came before it because the thousands of spectators who usually attend were replaced by cardboard cutouts.

“Normally, there are thousands of you here with us helping us celebrate,” said Dan McGinley, aka Moonshine, one of the top-hatted and face-masked club members officiating at a spectacle that was held virtually on Tuesday.

“This year, a few of you did manage to sneak in – in replica form,” McGinley in the pandemic-subdued ceremony that was live-streamed. “Your avatars are our crowd. You look great.” 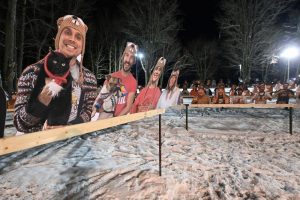 The groundhog’s 2021 winter prediction came as people across the U.S. Northeast were digging out from a massive storm that dumped more than 2 feet on the region, cutting power to thousands, halting transportation and killing at least three people.

At least two other prognosticating groundhogs disagreed with Phil. New York City’s Staten Island Chuck and Woodstock Willie of Woodstock, Illinois, where much of the “Groundhog Day” movie was shot, both called for an early spring.

Groundhog Day evolved from an annual Feb. 2 European Christian ritual into which Germans introduced a hedgehog that would bring six more weeks of bad weather if it saw its shadow, the club said. The tradition was brought to Pennsylvania with German settlers who substituted a groundhog for their first known celebration in 1886, it said.

This year’s prediction was the groundhog’s 106th for an extended winter, but the club’s president said Phil was also looking beyond the next six weeks.

“He also told us after winter, you’re looking forward to one of the most beautiful and brightest springs you’ve ever seen,” said Lundy.