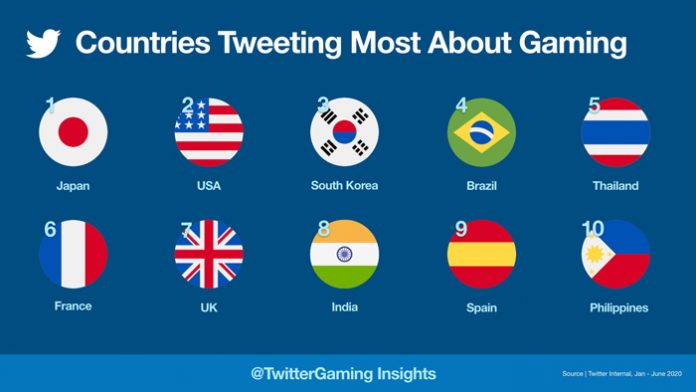 With people confined in their homes, gaming is one of the easy ways to get a daily dose of entertainment. As the go-to platform for #WhatsHappening around the world, gamers go to Twitter to actively discuss their favorite titles and the latest news in the industry. APAC is the hotspot as the conversations are steadily increasing, hitting 55% growth in APAC and 112% in the Philippines for H1. With over 1 billion Tweets gathered in the first half of 2020, the Philippines ranks 10th as the country that has Tweeted the most about gaming so far this year.

In a period where outdoor activities are halted, gaming serves as an outlet for people to utilize the additional influx of time at home more importantly, they also saw gaming as a way to find normalcy or a temporary escape from reality as the pandemic drastically changed the way people live. Among top gaming titles, Filipinos talked the most about Animal Crossing: New Horizons, PUBG, DotA 2, Adopt Me, and Final Fantasy during the first half of 2020.

Gaming can also be an interactive way to socialize and bring people together. Filipinos on Twitter used games to create a virtual hangout spot, events venue, or to just simply collaborate with friends through quests and in-game adventures. They look for games that allow them to interact with other players such as online, social network, or multiplayer games.

Apart from social or multiplayer games; Adventure and action (33%) are the second top genres that Filipinos like to dive into. Interestingly, male Filipino gamers are heavily invested on playing eSports. 41% of them claimed that playing video games is their long-time hobby, while 30% of Filipino GenZ also shared the same sentiment.

In Southeast Asia, games with a social aspect are in high demand among people under 18 and up to 34 years old. Locally, 47% of Filipino GenZ gamers played social or multiplayer games in April 2020. This is followed by adventure or action games (37%), and role-playing games (29%). The Millennials, on the other hand, share the same preference in genre but with the addition or casual games such as puzzles or any game that does not require much time or strategies.

Gaming also provides amusement for adults during the lockdown. In fact, Filipino Twitter users from ages 55 and above shared that they play video games to pass the time (25%) and have fun things to do (19%), though they are not much keen on trying new and advanced games and mostly stick to casual games (20%) and try a bit of adventure and action (11%).

“Gaming industry and its conversation growth are gaining momentum over the past few years, and it further amplified because lockdown made people resort to video games to meet their need states such as in socializing, normalizing and idling,” said Martyn U’ren, Head of Research at Twitter, APAC & MENA.

Online world and the coming campaign