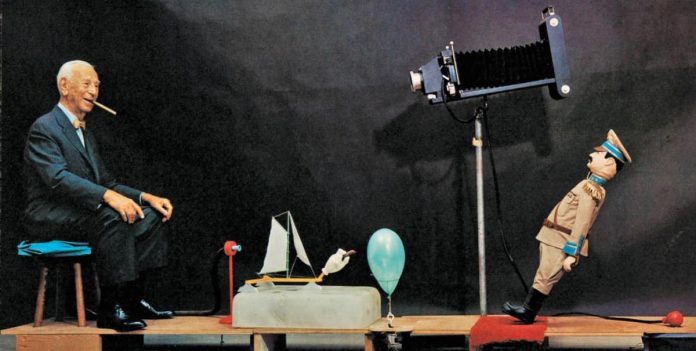 NEW YORK. – Caitlin Diel waited in the shower as her brother started their chain-reaction machine, dropping a marble into a tube that sent a toy train speeding, a deodorant stick flying and a stuffed bunny racing along a zip line to finally shoot a bar of soap into her hands.

Cheers erupted in their bathroom in Laurel, Maryland, where, after 106 failed attempts over six hours, the Diel children accomplished their goal and qualified to enter a video contest in the age of COVID-19: build a Rube Goldberg contraption that drops a bar of soap into someone’s hands.

“So confident!” Caitlin said as she stood in her swimsuit, hands cupped in anticipation of the catch that would get their video into the competition run by Rube Goldberg Inc, a nonprofit organization named for the Pulitzer Prize-winning cartoonist, who drew overly complex, zany inventions.

New York-based Rube Goldberg Inc holds an annual contest in which entrants string together everyday items to make complicated systems to accomplish a simple task. This year’s competition to “Turn on a light” was canceled when the coronavirus pandemic shut schools – the primary participants – but was replaced by a remote video contest focused on the guidance to wash one’s hands to curb the virus’s spread.

Winners who make the best kooky machines with 10 to 20 chain reactions to deliver a bar of soap get Rube Goldberg Swag Bags with books, water bottles, light-up hats and more.

The late cartoonist’s granddaughter, Jennifer George, said the competition was designed in part to keep families engaged during a seemingly endless quarantine.

The late cartoonist-inventor Rube Goldberg creates a live version of his drawing for an overly complicated way to shoot a photograph of yourself, which had been displayed in November 1970 at the Smithsonian Institution exhibition ÒDo It the Hard Way: Rube Goldberg and Modern TimesÓ in this handout photo provided by the Rube Goldberg Inc., a non-profit that honors his memory. Handout obtained by Reuters on May 14, 2020. Rube Goldberg Inc./Handout via REUTERS

It aims to deliver vital lessons with creativity, artistic expression and just plain fun, she said.

“If the whole trajectory of your machine is to drop a bar of soap into someone’s hands, I hope that sends the message of how important handwashing is,” George said.

As the United States reopens, handwashing remains a key step for staying safe from the virus that has killed more than 93,000 people in the nation and more than 327,000 worldwide, health experts say.

The contest’s silliness is key to generating positive feelings about what may have become a negative, frightening experience for children, say mental health experts.

“Every time they are coming to wash their hands, we’re triggering all this fear, they are seeing that their parents are anxious,” said Dr. Anne Glowinski, who teaches child and adolescent psychiatry at Washington University School of Medicine in St. Louis.

“Creativity and play introduces an element of pleasure and levity that is really important to connect kids. It brings more joy to the message as opposed to ‘Ahhh! We have to wash our hands because of this horrible virus!’,” Glowinski said.

The contest has drawn at least 225 submissions from more than 33 states, cities as far away as Liverpool, England, and countries as distant as Mozambique. Winners are set to be announced on June 7.

The Diel children – Madeline, 8, Caitlin, 11, and Ben, 13 – said the contest demanded brainstorming, cooperation and perseverance, and that the end result was something completely different from what they expected.

“Remembering all the times that me and my family spent building that, putting it back together, it was great memories that completely erased the fear from my mind,” Ben said.

“When I hear ‘Wash your hands’ now, my mind goes to ‘Ahhh, remember that Rube Goldberg machine that drew us all together – and also made us go partly insane?’” Caitlin said, laughing.

Madeline added, “We were like ‘We can do it!’ And that’s what this was really about.”