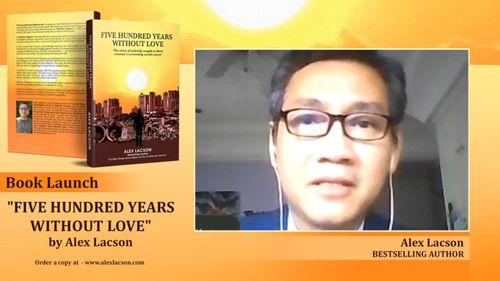 “Five Hundred Years Without Love” is bestselling author Alex Lacson’s first novel. It tells the story of the members of a poor family, who work in different sectors, each of whom suffers from the ills that contribute to the collective worsening social cancer plaguing our country. Their daily struggles, misery and reality mirror what is happening to millions of Filipino families today. 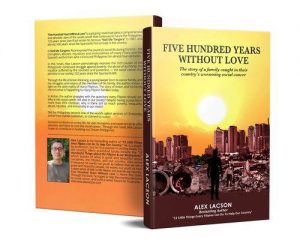 The story of Anton Hinirang and his family reflects our own story and journey as a people. It reflects the story of the Filipino in the last 500 years, taking a comprehensive and wholistic view of the country’s present-day social cancer, 133 years after Dr. Jose Rizal wrote his “Noli Me Tangere” in 1887.

In Noli Me Tangere, the Philippines’ national hero Jose Rizal exposed the country’s social ills during his time – the corruption, abuses, injustices and immoralities of the friars and Spanish authorities who occupied the Philippines for close to four centuries.

In this novel, Alex Lacson painstakingly exposes the various root causes of our country’s social malaise at present, which results in the continuing massive poverty, powerlessness and misery among majority of the Filipino people.

Paradoxically, those last five hundred years were a period of greed, abuse, injustice and immorality. Those were years of social cancer, when the few with the power and influence took advantage of the many who were poor, ignorant and powerless.

Five centuries when a great many Filipinos lived without dignity. Five hundred years without love.

For almost four centuries, the Filipinos were colonized and enslaved by foreign rulers – first by the Spaniards, followed by the Americans and the Japanese. Nowadays, many of our people continue to be enslaved, by their own kind, in many political territories and corporate fences. Today, the worst enemy of the Filipino people is the Filipino himself.

But the book is not merely about the social ills of our nation. It is also about hope. It also offers a possible cure or solution.

In the last portion of the book, Alex Lacson talks about “A Dream Philippines”. It is a vision of a developed, prosperous and more humane nation which can be achieved if we can implement a package of reforms, mostly economic, which are discussed in the chapter.

Through this novel, Alex Lacson hopes to contribute to our pursuit of a Dream Philippines. His hope is that the book will reach our youth, particularly those in Gr 9 or 10 studying the Noli/Fili, as a companion book for reflection and a call to action.