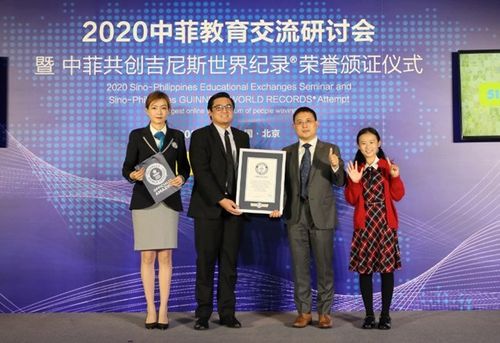 THE coronavirus disease 2019 (COVID-19) cannot limit the enthusiasm for dialogue and exchanges between the Chinese and Filipinos.

51Talk, an online English education company based in China, recently held the China-Philippines education exchange online seminar and released the results of the Guinness challenge on the “world’s largest online video album of people waving,”
Chinese Ambassador Huang Xilian said in his speech 51Talk has fully tapped the talents of the Philippines in recent years and has absorbed more than 20,000 Filipino English teachers.

Through the internet, Xilian said, it has opened a window for thousands of Chinese children to connect to the rest of the world, creating an opportunity for China-Philippines education and cultural exchanges.

He added that China’s emerging industries such as online education under the COVID-19 pandemic have catalyzed a new win-win cooperation model for China and the Philippines.
Apart from helping China’s distance education, 51Talk has provided a large number of online job opportunities for Filipinos.

Sta. Romana hopes that more doors will be opened for more Filipino educators in the same mutually beneficial manner.

“Chinese parents understand that Filipinos share their roots from Asia and that they have a better understanding of the Chinese culture which helps them in teaching Chinese kids effectively,” Huang said.

Filipinos are a perfect fit to educate Chinese children ages five to 12 years, which make up over 90 percent of 51Talk’s students, he pointed out.

This year also marks the 45th anniversary of the establishment of diplomatic relations between China and the Philippines.

Under the strategic guidance of President Xi Jinping and President Duterte, Xilian said China-Philippines relations have entered a “new golden age” and the cooperation in various fields between the two countries has achieved fruitful results.

Sta. Romana said they are inspired to work harder towards the success of the friendship between the two countries as well as the enhancement of their bilateral relations.

Huang said 51Talk is pleased to have contributed to strengthening the ties of the two countries through education.

This event collected more than 5,000 Chinese and Filipinos in a short period of time to wave their greetings through the internet which became another pioneering effort in China-Philippines cultural exchanges, Xilian said.

From the brilliant smiling faces in the video, he said he felt the profound friendship between the two countries for a thousand years, conveying goodwill and hope to overcome the pandemic and sustain the friendship for generations to come.