THE House of Suman in Clarin, Misamis Occidental is a legacy of the late mayor David Navarro and part of the “One Town, One Product” program of the government. Established in Jan. 5, 2009, the not-to-miss and popular pasalubong center treats guests to the many flavors of suman.

Here, the unique Filipino delicacy comes in different kinds and fillings such as plain suman, Balintawak suman and suman with either buko, nangka, durian, kalabasa, gabi, mango or peanut. 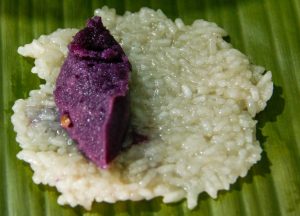 Besides supporting the agriculture sector and local economy, Baylon said the suman-makers’ remuneration helps send their children to school as well as enables them to build their homes and invest in other properties, among other needs.

Just a few steps from the pasalubong center is the production house, where suman is freshly cooked and prepared by the suman-makers. Suman is best paired with hot chocolate or coffee.

A local resolution has recognized Clarin as the “Suman Capital of Misamis Occidental.”

Clarin’s signature delicacy has made a remarkable economic impact as suman production is considered among its top income generating ventures.