BRUSSELS. – Hundreds of chefs’ jackets were laid down in the centre of Brussels on Thursday to highlight the plight of hotels, restaurants and cafes that have been shuttered for nearly two months during the coronavirus outbreak.

The whites, separated by a stripe of black kitchen tops, were displayed in neat rows to resemble a cemetery in the ornate central Grand Place square. 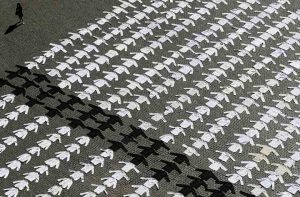 Coralie Michiels, one of the organisers of the protest, said the action was partly to show the scale of the hotel, restaurant and cafe sector – providing a livelihood for 10% of Belgium’s 11.5 million people and contributing 18 billion euros ($19.4 billion) a year to the economy.

“There is an impression that we’re not really being heard,” said Michiels, whose family owns Restauration Nouvelle, a company with restaurants and catering services.

“We need to know what measures there are and be able to plan for the future.”

Belgium has begun easing its lockdown, with all shops allowed to open from Monday. However, bars and restaurants will stay closed at least until June, having shut their doors in mid-March.

Restaurants can still offer takeaway or delivery service dishes, but some, such as Michelin-starred Comme Chez Soi, have chosen to feed the homeless during the lockdown. Others have decided to provide meals for health sector workers.

Switzerland is set to allow bars and restaurants to reopen on Monday, while German states will start doing so from next week.