Home Be one with the fish' aquarium yoga among Hong Kong Ocean Park's...
Share
Facebook
Twitter
Google+
Pinterest
Linkedin
Viber
By Joyce Zhou, Farah Master
HONG KONG . – Against the vivid backdrop of a giant aquarium filled with sharks, manta rays and other aquatic life, a yoga group on Thursday performed side planks, chair poses and lunges, their arms outstretched to the ceiling. 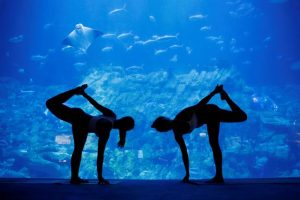 Hong Kong’s cash-strapped Ocean Park has begun offering fitness activities such as yoga, meditation and dance classes to keep its flagging business afloat and offset deep losses due to coronavirus restrictions that have battered tourism in the Asian financial hub.
Yoga instructor Jessica Lee said the fish in the aquarium were a calming presence during her class. “It’s really nice to be almost at one with them,” she said. “I feel as if I am in the water, moving as fluidly as they are.” 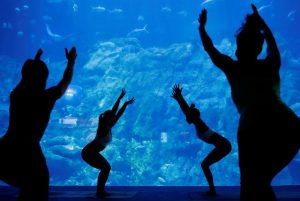 The 43-year-old theme park and Walt Disney Co’s Hong Kong Disneyland have been shuttered for most of the year, only reopening in September. Both parks are mandated to operate at a maximum of half-capacity and face masks remain compulsory.
At over HK$6 billion in debt according to its latest annual report, Ocean Park secured a HK$4.5 billion ($580 million) government bailout in May which it said would help it stay operational for another year. 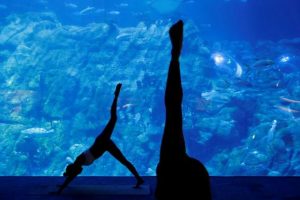 Anti-government protests last year and the rise of competing amusement parks in the region such as Chimelong Ocean Kingdom on China’s Hengqin island, have exacerbated pressure on both Ocean Park and Hong Kong Disneyland.
Ocean Park also said it would for the first time open hiking trails underneath its cable car ride which overlooks the South China Sea. Air-conditioned tents will be available for those who want to camp and barbecue, it said.
However, 26-year-old resident Sze who was visiting Ocean Park on Thursday, said paying an additional cost for yoga and hiking seemed unnecessary when she was only interested in the rides.
“We need to pay extra money to join the hiking activities while hiking is supposed to be free,” said Sze, who did not want to give her full name. “Doing yoga is also free if you go into the wild.”  – Reuters

Wealth managers frustrated over bitcoin, anxious for piece of the...