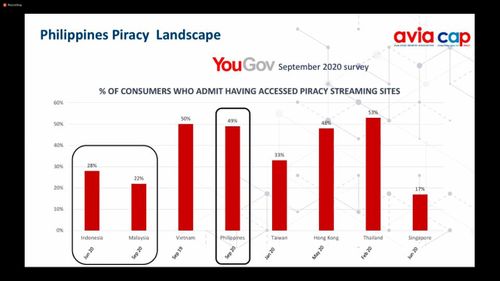 The pandemic has forced people to stay at home in order to keep themselves healthy. This has led to people consuming more media over the internet. Whether it is films or TV shows, the streaming platforms have made content easily accessible at a tap of a finger.

The rise in video streaming, however, has also resulted in an increase in internet piracy. From underground file transfer protocol (FTP) servers to peer-to-peer (P2P) services, internet piracy has evolved to full-blown websites that host stolen content streamed for free.

Free accessibility has made this extremely attractive for Filipinos. A survey commissioned by Asia Video Industry Association’s (AVIA) Coalition Against Piracy (CAP) and conducted by British market research firm YouGov, proved this, noting that 49 percent of Filipino responders admitted that they accessed piracy and illegal streaming sites. Furthermore, 47 percent of consumers who accessed piracy sites cancelled their subscriptions to both local and international content services.

“While legal subscription video on demand (SVOD) monetization is growing, piracy remains pervasive in the Philippines,” Neil Gane, general manager AVIA CAP, said. Gane added that about $120 million worth of revenue is lost due to piracy and this will continue to grow as more platforms get launched.

One of the more effective measures to address online piracy is through IP blocking, wherein internet service providers block access to a known illegal site’s specific internet address in its network. Efforts done in Malaysia and Indonesia has seen internet piracy drop from 61 and 63 percent, to 22 and 28 percent, respectively.

In the Philippines, there is a Bill currently before the Philippine Senate (Bill #497) entitled the ‘Online Infringement Act’ which proposes a regulatory site blocking mechanism which would empower the authorities to ensure that ISPs take “reasonable steps to disable access to sites whenever these sites are reported to be infringing copyright or facilitating copyright infringement.”

But until a law mandating IP blocking is implemented, the private sector will be at the forefront in the fight against stolen content. For Globe Telecom, this is done through a combination of both educating the public and offering avenues for ad-based free streaming platforms. Globe President and CEO Ernest Cu said, “The ill effects of online piracy cannot be underestimated. We have been an advocate of content streaming through legal sites only through our #PlayItRight program. This advocacy educates people on the impacts of online piracy and on making the right choices when it comes to online consumption.”