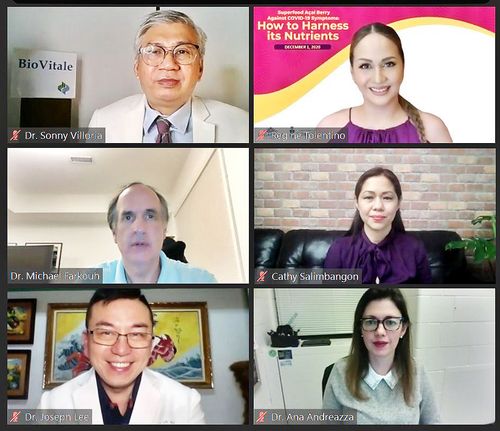 THE University of Toronto researchers have presented the nutrients found in the Brazilian açaí super berry as a viable option for potential treatment of some coronavirus disease 2019 (COVID-19) symptoms.

Slated to wrap up by the end of the first quarter of 2021, the clinical trial tests will determine whether an early intervention of açaí palm berry extract can help mitigate severe inflammation problems in COVID-19 patients, thanks to the superfood’s potent anti-inflammatory properties.

At the virtual forum which focused on the Canadian study, Dr. Ana Andreazza, associate professor of pharmacology and psychiatry at the University of Toronto, found that açaí can also significantly decrease NLRP3-mediated inflammation which is what triggers the body’s response to ward off infections and stress.

Andreazza, who works with other Brazilian researchers on this berry, said açaí was effective as an anti-inflammatory and has a very similar effect on the NLRP3 cell as it does with a damaged mitochondrion they have seen.

Her previous study also revealed that açaí may even prevent mental stress brought about by the pandemic.

Dr. Joseph Lee, a guest speaker at the forum who has done extensive research on açaí, said for the duration that the patients were given açaí, they are stable and there is no erratic change to them even if they are on maintenance for high blood and liver enzyme – and those are prone to changes.

Through continued monitoring of all the patients and their responses to açaí, Lee noted that açaí remains a most promising superfood that can likely live up to all the claims.

The researchers remain positive that açaí can potentially open doors in the fight against disease.

Dr. Michael Farkouh, lead researcher and director of the Peter Munk Centre of Excellence in Multinational Clinical Trials, said it will be known within the next six months if açaí can be shared globally as an efficient treatment.

“We can see if it can treat the virus and, if ever, be used for prevention as well as for the actual symptoms,” Farkouh said. It will also be monitored if there are any after-effects in COVID-19 patients two to five years down the line.

Dr. Sonny Viloria, an expert in integrative wellness, said this can make a huge difference in a country like the Philippines where many are unable to afford COVID-19 care.

“If proven effective, this is just another reason why the açaí berry should be a staple in our lifestyle,” said Viloria, who reiterated that one’s immune system remains the best weapon against sickness.

Cathy Salimbangon, Organique president and chief executive officer, said the findings from the University of Toronto’s study could be ground-breaking. Organique believes in “prevention over cure,” as it provides affordable, safe, effective, immunity-boosting premium health products powered by the Brazilian açaí super berry.

“We will continue to spread awareness about açaí until many people have more access to these supplements,” said Salimbangon, believing in the powers of açaí since 2009.

She noted that maintaining good health means good nutrition, and may be achieved with supplements like Organique.

‘Karatekas have what it takes’