LOS ANGELES. – After putting a coronavirus patient onto a ventilator to help him to breathe, Dr. Zafia Anklesaria noted to herself that her baby never kicked during emergency procedures.

It was not until she was back in her office and had removed most of her protective equipment that he made his presence known.

The hospital’s 22-bed COVID-19 intensive care unit has been at or close to capacity since the end of March. Some nurses are pulling 24-hour shifts due to the high volume of patients in critical condition, she said.

“The socio-economic class that we serve, people tend to live in close quarters, they don’t really have the privilege of good social distancing, and they are tending to get more infected as a result,” Anklesaria said.

People living in the highest poverty areas of Los Angeles county are dying of COVID-19 at more than twice the rate of those in the wealthiest areas, according to data from the county’s department for public health.

Anklesaria’s 12-hour shift starts at 7 am. She works four days a week on average in the ICU and another one to two days doing pulmonary consultations with patients.

After getting an update from the night shift she begins her rounds, donning and doffing her personal protective equipment as she enters and exits patients’ rooms. Nurses check on her regularly, making sure she is hydrated, properly protected and takes breaks to eat.

“I don’t think I could do this job pregnant without their help,” Anklesaria said. She has been lucky to have an easy pregnancy and the baby has been “really well behaved.”

“You’ve allowed your mom to do her job very well,” she said to her belly. 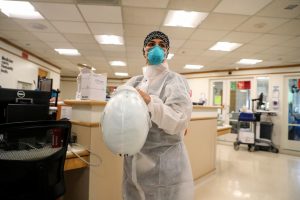 She worries, though, that the baby will hear the stress and frustration in her voice as she goes about her day.

“So I do try and reassure him when I get time to myself, I look down and say it’s all good, we’ve got this,” she said.

Still, there are physical limitations: she is slowly finding it harder to stay on her feet for long periods of time and often comes home with backache.

One May morning she had good news – one of the hospital’s first COVID-19 patients, an employee who had spent almost four weeks on the ventilator, was ready to have his tracheostomy tube removed.

“Yay, you did it, you are officially liberated!” she told 65-year old Vicente Arredondo as she removed the tube.

Anklesaria greets her husband, Aryan Jafari, 30, and their dog as she arrives home, after finishing a 12-hour day shift.

When she returned home, exhausted, her husband Aryan Jafari, 30, held back the dog as she dashed to the shower. She initially brought up the possibility of isolating herself from him, but he wouldn’t hear of it.

He worries about her and the baby, but “he is fortunately understanding of me wanting to and needing to work,” she said. “This is a job we sign up for. If we don’t do it, who’s going to do it?”

Jafari is an engineer and best convinced by data, so she has sent him studies suggesting pregnant women and babies are not at a greater risk from the coronavirus. She has promised her family if any evidence to the contrary emerges, she will step away from the ICU.

Anklesaria, who comes from a family of doctors in India, has been in the United States since college. Her parents still live in Kolkata and she worries they won’t be able to come for the birth.

Due to the virus, she has to go to her prenatal visits alone, though her husband has joined her ultrasound appointments via FaceTime.