When the lockdowns started precisely a year ago, it felt as if the world stood still. For the first time in memory, there were no cars and buses on EDSA for weeks on end. The MRT stopped. Streets were empty. Markets and malls were closed. It was as if the the city’s busy heart suddenly stopped. Everyone was anxious, and some, even afraid.

But then, the unexpected happened. We saw the crisp blue sky. We saw the horizon hosting glorious sunsets and hopeful sunrises, when we could not be bothered to look before.

Despite the looming threat, we found a tenuous peace; a temporary truce between the relentless pursuit for progress and battered nature that has always been around us.

This is the inspiration for Nature’s Hymns, a joint painting exhibition by Francis Nacion and Melissa Yeung Yap at the Megamall Art Center. Presented by Galerie Francesca, Nature’s Hymns opens on March 17, 2021 and runs until March 28.

Francis Nacion Jr. is known for his intricately sgraffitoed paintings, with complex patterns scratched on wet oil paint to reveal a contrasting color underneath

An artist with a wide following, his collectors are equally attracted to his brightly colored paintings, as they are to the peaceful and cheerful subjects he often portrays. For Nacion’s works, life is lived in abundance and prosperity. And this is what he brings to the fore on this important exhibition. 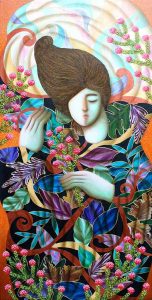 Joining Nacion in this endeavor is artist-advocate and protean businesswoman Melissa Yeung Yap. Yeung Yap has also used art, both as a medium for empowerment and as a means of bringing her advocacies to the fore. She has used art as therapy to the children in post-war Marawi. And she uses Philippine indigenous handwoven fabrics like t’nalak, hinabol, and inabel in her artworks woven by the in an effort to sustain their traditional weaving, and make it a viable source of livelihood for them.

In “Nature’s Hymns,” Yeung Yap integrates indigenous handwoven fabrics and patterns with her nature-inspired oil paintings, symbolizing the harmony the indigenous peoples have achieved with their surroundings. Simultaneous to this, her work also points to the marginalization our indigenous peoples have experienced when our country took on a cash-based economy. She collages these fabrics and patterns into foliar paintings or into the collaborative work between her and Nacion, of women seemingly garbed with colorful, entwining living flowers and leaves.

Govs have final say on Ilocos offer to PBA