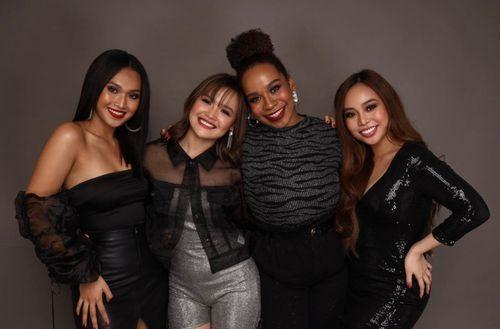 GMA’s girl group XOXO is ready to spice up the local music scene with their self-titled debut single under GMA Music.

Coming from the all-original singing competition “The Clash,” these new generation divas, composed of Riel, Dani, Lyra, and Mel, are raring to show the public their superb vocals and impressive dance moves.

In their newest single composed by Kiko Salazar, they combine talent and edgy personalities with such irresistible harmony.

Riel related that they want to introduce their group to the audience through “XOXO,” “We want to show them who we really are as performers as well as when we’re not on stage. We know that we cannot please everyone but we’re not going to stop pursuing our dreams. Kagaya nga po ‘nung sinabi namin sa song ‘no matter what they say, no matter what they do, we’re gonna keep on flying’.”

Dani added that they want to empower fellow women and encourage them to embrace all kinds of beauty through the song, “We want to inspire people who are not feeling good and confident with themselves, those who think that they are not perfect or they don’t fit in sa ‘standards’ ng society. We want to show them that it is okay to be different and each of us has our own kind of beauty.”

Fortunately, they were able to record the song before the enhanced community quarantine was implemented. However, Lyra admitted that it was challenging to prepare for their single’s dance choreography by themselves in their own homes. But with everyone’s persistence, they were able to pull it off with the help of their choreographer, RM Cortez.

She said, “We shared some ideas on how the whole choreography will work out based on the song. It’s a powerful song so the steps and routines should go along too. We also started practicing at home and send individual videos. New normal style na po yung kanya-kanyang practice sa bahay.”

The girls recently celebrated their group’s first year anniversary since their debut. Mel expressed her gratitude to the people who trust and support ‘XOXO’ since day one. She noted that they have come a long way together and their experiences have strengthened their bond, “Magkakaibigan na kami since ‘The Clash’ pero mas naging malapit kami sa isa’t isa nang mabuo ang XOXO dahil mas nakilala namin ang bawat isa at mas malalim na ang pinagsamahan namin.”

“XOXO” will be available for downloading and streaming beginning September 10 on Apple Music, Spotify, YouTube Music and other digital stores worldwide.