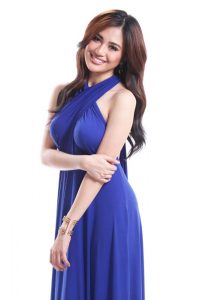 Julie Anne San Jose has released her new song worldwide a few days ago. It is a collabora- tion with rapper Gloc-9 and this is their second song together after last year’s “Maleta.”

Julie Anne is also excited as the Sunday noontime show she’s hosting with Alden Richards, “All Out Sundays,” went back live on the air last Sunday and the feedback from the show’s fans who missed it has been very positive.

“Before that, ang daming mga nagtatanong sa akin kung kailan kami magla-live uli and they all rejoiced when we performed live again last Sunday,” she said. “So abangan nyo at manood kayo because this coming Sunday, we prepared more fabulous numbers. Ang buong ‘All Out Sundays’ barkada is very thankful sa suporta ninyo.”

Julie Anne gained more admiration from her fans after her breakup with Benjamin Alves.

She never talked against him to reveal the cause of their split. Her fans call her “the patron saint of moving on.” So what did she do to move on from her heartbreak?

“Iba-iba naman ang paraan ng bawat tao para maka-move on from a bad relationship, ‘di ba? For me, what I did was not to dwell on the pain. Madali kasi akong maka-move on. I don’t know. Since mako-consider din ‘yung medyo preoccupied din ako with other stuff, like busy rin ako sa work at sa iba kong ginagawa. I keep myself productive at home and then I go out with friends, so nandoon ‘yung support din from the people who really love me.”

Now, aside from “All Out Sundays,” she will also soon be busy as a host of the third season of “The Clash.”

All of a sudden, there are so many local Boys Love series being produced and shown not on mainstream TV but online where viewers can access them on YouTube for free. Boys Love, as the title itself connotes, is a romance about two young men falling in love with each other.

We thought this genre started in Thailand, where it’s now shown on mainstream TV, but upon research, we learned that such homoerotic relationship shows started in Japan in the late 1970s, called yaol. This later became popular in Thailand and was called wai.

Thai filmmakers there started producing their own BL content in the early 2000s in such shows as “Kiss Me Again” and “Love By Chance.” In 2019 alone, more than 20 of such shows were produced in Thailand and they have also amassed a following in other Asian countries, including the Philippines. Their most popular show now is “2gether: the Series,” about two male college students falling in love with each other.

In the Philippines, it’s GMA who first experimented with gay love stories, starting with the immensely successful “My Husband’s Lover,” the trans series “Destiny Rose” and the lesbian love story, “The Rich Man’s Daughter.”

Locally, the first BL series online is “Game Boys,” produced by IdeaFirst Company of Perci Intalan and Jun Lana, written by Ash Malanum and directed by Ivan Payawal. It’s also the best so far and stars Kokoy de Santos and Elijah Canlas as two teens who meet each other while playing online games and their story is told through the video feeds on their respective laptops, making it very contemporary.

Now, we have many other BL series being shown online, so there’s practically a glut of such shows. First is “Sacristan” by Darryl Yap of “Jowable” fame, then “Hello Stranger” on iWant streaming.

We have yet to see “In Between” and “Unlocked,” but we’ve seen “Sacristan” and “Hello Stranger” and they both most certainly lack the wide appeal of “Game Boys.” The stars of “Sakristan,” Clifford Pusing as Zachary and John Henry Villanueva as Christian, are both unattractive, lack star presence and look so ordinary. The storytelling also feels dated. In this season of the pandemic, it feels like you’re watching a ‘90s romance, only with closeted gay characters.

“Hello Stranger” is even more ho-hum, even if its main star, Tony Labrusca, made waves in the iWant movie “Glorious.” His projection is too masculine and he certainly has no chemistry with his love interest, JC Alcantara, who lacks star quality and seems better suited for supporting roles. The supporting actor who plays one of their friends, Patrick Quiroz, is definitely much more appealing and looks like he’s also bursting with more energy. Also, they copied the format of “Game Boys” using laptop screens to tell their story, so that’s minus 20 points for being copycats.

“Game Boys” remains the most worthy to be watched BL series at this point. It has much humor and the two leads are both splendid, particularly the charming Kokoy de Santos.

Each episode is well written and inventive, including giving meaning to new words like “potassium,” which means “potah na, assuming pa.”

One thing we noticed with the BL shows is they all feature straight-acting guys. All act masculine and there are no swishy effeminate fags sashaying for the camera. This is understandable as such cross-dressing characters are often portrayed only as objects intended for comic relief and derision, not to be taken seriously.

In the BL series, the sexuality of the characters are not really delved into deeply. The guys don’t identify themselves as gays but are projected as mere people who just happen to be in love with each other, regardless of gender.

This makes it more of a fantasy than reality. This likewise suggests that only masculine acting gays are the ones who are desirable.

Well, maybe, eventually, they will feature openly gay characters in their stories. But as of now, if you want to see real transgenders playing themselves with so much gay abandon on screen, watch such American series as “Pose” and “Legendary” where you can see them in wild abundance.