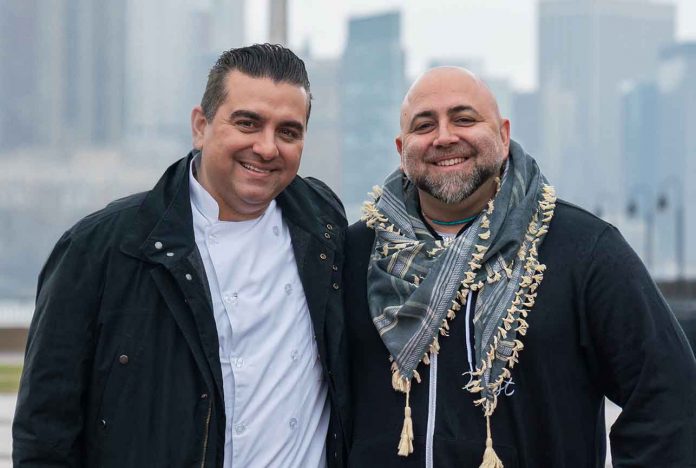 Longtime rivals “Cake Boss” host Buddy Valastro and “Ace of Cakes” host Duff Goldman go head-to-head in round two of the most epic baking battle on the second season of “Buddy vs. Duff.” Their wives, Lisa Valastro and Johnna Goldman, will join in the fun as they travel from coast-to-coast and compete for the crown, finally putting an end to the latest feud in baking history.

This season’s supersized cake creations will push the limit of innovation and imagination, as they are judged on a point system based on creativity, difficulty, adherence to the theme, and the incorporation of a surprise element in the form of details, special effects, interactivity, and more. The pressure is on as the two biggest names in cake vie to rise to the top to be crowned king!

From realistic prehistoric dinosaur cakes that look alive to mini-golf cakes that are interactive, and from moving theme park cakes to cakes with special effects to celebrate fantasy and fun, Buddy and Duff’s abilities will be tested at every turn as they build jaw-dropping cakes.

Don’t miss the most epic baking battle on television where the winner gets ultimate bragging rights after being named the King of Cake as the second season of Buddy vs. Duff premieres on July 15, 9:00 p.m., on TLC (Sky Cable CH 32/Cignal TV CH 64/Destiny Cable CH 62).