Cartoon Network’s beloved Baby Bears assemble for their next adventure, “We Baby Bears,” an original comedy coming second half of 2021. Overloaded with the cuteness and humor that fans around the globe adore them for, the series tracks baby Grizz, Panda and Ice Bear through a multitude of imaginative worlds, but this time via their magical box. 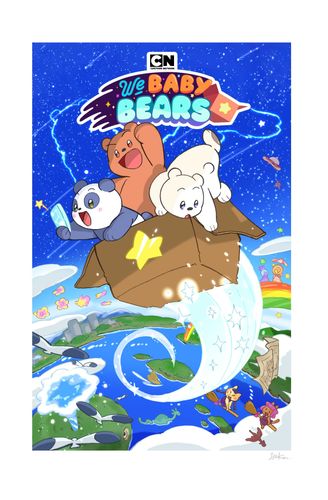 Currently in production, “We Bare Bears” director Manny Hernandez returns as executive producer to bring his own creative vision to life in the newest iteration of the sibling cubs’ arrival.

“Manny’s admiration for anime and music come to life in this fresh new expansion of a beloved franchise,” said Tom Ascheim, president, Warner Bros. Global Kids, Young Adults and Classics. “The spectacular landscapes and musical inspirations transform this new series into an unforgettable journey for all We Bare Bears’ fans and beyond. And did I mention they are baby bears?!”

“We Baby Bears” features the Baby Bears on their search for a place they can settle down and fit into. Each episode transports them into vibrant and colorful worlds, where they befriend legions of familiar fairytale faces. During their nonstop crusade, they are faced with the decision to stay or to continue on their journey for a permanent abode they can call home. Produced by Cartoon Network Studios, “We Bare Bears” creator Daniel Chong also joins Hernandez as executive producer.

A parent’s love is limitless and sometimes knows no boundaries especially in TLC’s hit reality series “sMothered” that follows the lives of six extremely close and over-the-top mother-daughter pairs with uncanny, but undeniable bonds. The new season premieres on Thursday, October 15 at 9 p.m.

While a love of a parent for their child is unquantifiable, some parents take it up a notch to the point that it blurs the idea of letting a child grow and experience life on their own. Parents can forget that an important part of growing up is allowing the child to make mistakes, to choose what they want to do, and to figure out what they like and dislike. As parents, offering guidance and support is one of the greatest jobs one can have.

In “sMothered,” the mother-daughter relationships are closer than average. From sharing their morning showers to sexy photoshoots together, these ladies bring a whole new meaning to unconditional love.