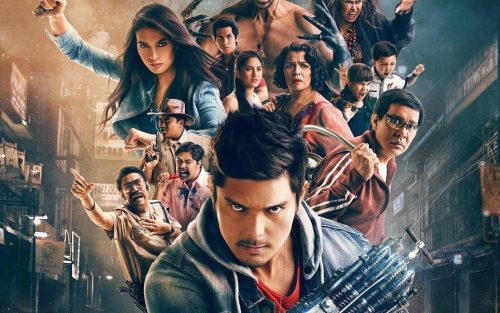 THE family bonding never ends as GMA offers another fresh set of movies for the viewers this Sunday, April 19.

Discover a wonderful and futuristic themed land on Kapuso Movie Festival’s first feature “Tomorrowland.” Witness how a genius inventor (George Clooney) and a teenage science enthusiast (Britt Robertson) embark to an intriguing alternate dimension where their actions directly affect their own world.

This will be followed by the TV comeback of one of the world’s most admired superheroes based on the DC Comics in the iconic 2005 ‘Batman Begins’ starring Hollywood actor Christian Bale. Follow his journey as a bat-masked vigilante who brings justice upon the criminal underworld of Gotham City.

Prepare for a spooky adventure with “Kubot: The Aswang Chronicles 2” headlined by Dingdong Dantes. It is the second installment of the “Aswang Chronicles” franchise. The story returns as the gang led by Makoy (Dingdong) encounters another variation of aswang, which are called Kubots, disguised as hairy bat-like creatures. Will they be able to survive from a new breed of enemies?

Meet those in the dark side in the 2004 classic horror film “Spirit of the Glass” on “Sunday Night Box Office” (SNBO). A creepy turn of events will unfold at a remote ancestral home owned by the family of Kelly (Rica Peralejo), where she and her boyfriend, Choppy (Dingdong Dantes), and a group of their pals fight boredom by dabbling in a supernatural game called spirit of the glass.