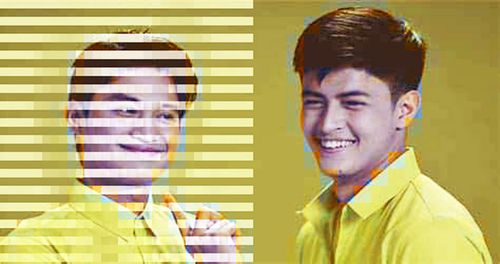 The ten were chosen based on the following criteria: Artistic Excellence – 40%; Commercial Appeal – 40%; Filipino Sensibility – 10% and Global Appeal – 10%. They come from all genres, from dramatic to rom-com to horror to fantasy and biopic. There is also an entry that belongs to the Boys’ Love (BL) category: “The Boy Foretold by the Stars.”

A romantic coming-of-age drama about two young boys, “The Boy Foretold by the Stars” is billed as the first BL movie in the Philippines. It begins with Dominic (portrayed by Adrian Lindayag), a senior high school student at St. Francis Academy. Together with his high school bestie, Timmy, they seek out a fortune teller named Baby R, whose reputation as a celebrity fortune teller is unparalleled in the field of match making.

Baby R reads Dominic’s future and tells him that he will meet his soulmate in the upcoming optional retreat called Journey with the Lord. He will be a fellow high school senior whose identity is unknown to them, but there will be three signs that will point to the boy foretold by the stars.

At first Dominic (Renshie de Guzman), believes that it could be Paul, his childhood crush, who is one of the participants in the retreat. But fate has another plan, as his efforts to get close to Paul is misdirected by destiny and is pushed towards the brokenhearted Luke, played by Keann Johnson.

One by one the signs are manifested as Dominic spends time with Luke and slowly he is convinced that Luke is his soulmate. All is well as he feels that he has found what he has been looking for.

But falling in love with a straight boy in a Catholic all-boys school comes with a price, as Luke struggles to keep up his friendship with Dominic as he faces peer pressure from his friends as well as the return of his ex-girlfriend.

“The Boy Foretold by the Stars” is written by Dolly Dulu, produced by Jodi Sta. Maria of Clever Minds Inc. and directed by Derick Cabrido.

From factory to faraway village: behind India’s mammoth vaccination drive