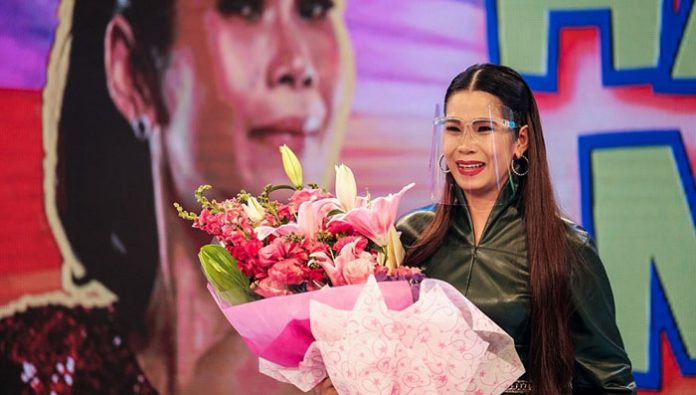 Because reunions and birthday parties are what we sorely miss these days, TV5 brings more prizes and surprises in its wacky game shows “Fill in the Bank” and “Bawal na Game Show.”

This week, viewers are up for a double celebration with game show host Pokwang’s birthday bash in “Fill in the Bank” and the most-anticipated TGIS cast reunion in “Bawal na Game Show.”

Hosted by “Manedyer” Jose Manalo and Pokwang as Madam Poky, “Fill in the Bank” will have fellow comedians Ketchup Eusebio and Archie Alemania as contenders in its upcoming episode on Monday, August 24 at 7:30 p.m. Next episode on Wednesday, August 26, will have celebrities Ria Atayde and Jane Oineza vying for the jackpot money of as much as P150,000.

A special birthday episode is up on August 28 for “Fill in the Bank” host Pokwang as she is surprised by guests Sunshine Garcia and Saicy Aguila, friends from former shows “Banana Sunday” and “Wowowin.” Not to be missed is Madam Poky’s touching message about being grateful to Archangel Media and TV5 for her blessings, including having projects during this time of pandemic, and her birthday wish for everyone to stay healthy and strong in facing this crisis. Every week, two players will compete and get to play the fun and innovative Ayuda Teh! Machine (ATM) and Panghakot na Papremyo Equipment (PPE). They also get to compete in these exciting rounds: Enter your Pin Code, Cheque or X, Coin Rush and Huli Cash that allow players to earn more money and advance to the final round. “Fill in the Bank” airs every Monday, Wednesday, and Friday at 7:30 p.m. on TV 5.

Ghorl Twins Wally Bayola as Bebe Ghorl and Paolo Ballesteros as Barby Ghorl are back in the hilarious “Bawal na Game Show” with intense challenges in its upcoming episodes that will test the new batch of “pasaways.” Get hot this rainy season as Viva Hot Babes Gwen Garci, Sheree

Andrea Del Rosario, and Zara Lopez sizzle in the August 25 episode. It’s not a question of who got the greatest bod but whose antics and tactics will outwit the rest of the hot babes to make it to the jackpot round.

From sexy to sporty, basketball stars Joe Devance, Chris Newsome, Sol Mercado and Ryan Arana will be the “pasaways” competing in the August 27 episode at 7:30 p.m. Watch how good they are in following rules off the court with challenges like “Bawal Ma-Fall,” “Bawal ang Da Moves,” “Bawal ang Sablay,” “Bawal ang Sumuko” and the bonus round “Bawal na Roleta.”

“Bawal na Game Show” brings a “kilig” reunion episode as the cast of popular ‘90s barkada TV series TGIS reunite while aiming for the cash prize of as much as P100,000.00. The August 29 episode will see the comeback of ‘90s TV teen stars Angelu De Leon, Bernadette Allison, Bobby Andrews and Michael Flores. How good are they in following today’s rules of the game compared back then? Be sure to tune in to “Bawal na Game Show,” airing on Tuesdays and Thursdays at 7:30 p.m. and on Saturdays at 7 p.m. on TV5.