Feige told a Disney presentation for investors that Boseman’s performance as the proud Black leader of the fictional land of Wakanda was iconic, and that he would not be replaced. 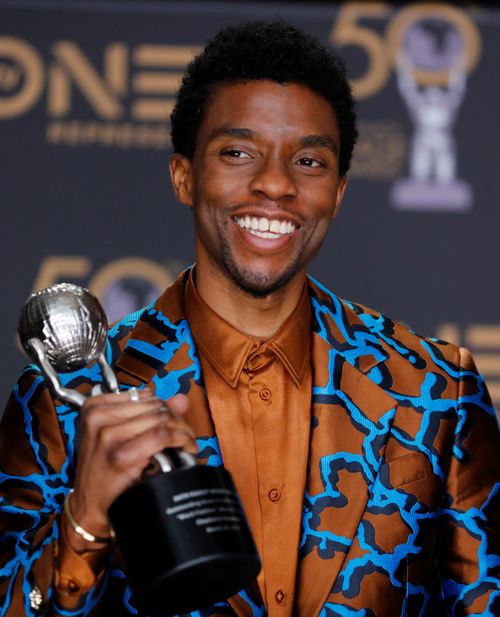 Boseman died in August of colon cancer at age 43 after a four year battle with the disease that he had kept private.

Feige said the sequel would honor Boseman’s legacy by continuing to “explore the world of Wakanda and all of the rich and varied characters introduced in the first film.” He did not give details but said the sequel was due to arrive in movie theaters in July 2022.

“Black Panther” executive producer Victoria Alonso last month denied speculation that the filmmakers planned to use a digital double for Boseman in the sequel.

Alonso was quoted as telling Argentine newspaper Clarin in a November interview that the filmmakers were taking time to decide how to continue the story.

Kardashians headed back to TV with new deal on Hulu

LOS ANGELES – The Kardashians are heading back to TV, despite bringing an end earlier this year to the reality show that shot the family to fame.

Streaming service Hulu on Thursday announced it had signed a deal with Kim, Khloe and Kourtney Kardashian, their mother Kris Jenner and half sisters Kylie and Kendall Jenner.

Under the deal, the women will create new content that will stream on Disney-owned Hulu in the United States and in multiple countries overseas on Star, Hulu said.

Hulu did not say whether the women, who have tens of millions of followers on Instagram and Twitter, would appear on screen and did not give details of the programming they would create under the multi-year deal.

The platform said the new content was expected to debut in late 2021.

The announcement came three months after the Los Angeles-based family announced it was ending “Keeping Up With the Kardashians” on NBCUniversal’s E! network in 2021 after 14 years.

They gave no reasons for the decision but the E! network said at the time that the family had decided “to live their lives without our cameras.”

“Keeping Up with the Kardashians,” which chronicled the personal lives of the family, helped make the women household names and launched their careers in the fashion, modeling and beauty business.

The entertainment company detailed 10 new TV shows based on favorite characters from the sci-fi saga, including smuggler Lando Calrissian and droids C-3PO and R2-D2.

The announcement by Lucasfilm president Kathleen Kennedy came during a presentation for investors and follows the success of the “Star Wars” hit spinoff series “The Mandalorian” on Disney+ since November 2019.

Kennedy said the “The Mandalorian,” featuring fan favorite Baby Yoda, had opened “an entirely new era for ‘Star Wars'” and the chance to explore some 25,000 years of history in the galaxy far far away.

The Jenkins feature film, called “Rogue Squadron,” will premiere in movie theaters at Christmas 2023. Kennedy said New Zealand director Taika Waititi was still writing the screenplay for another as yet untitled film in the franchise that Disney announced in May.

The announcements came a year after Disney decided to pause the development of “Star Wars” movies, one of the industry’s most lucrative franchises, to focus on TV shows following the relatively disappointing box office takings for “Solo” in 2018.

On Thursday, Kennedy said two “Mandalorian” spinoff series, called “The Rangers of the New Republic” and “Ahsoka” would come to Disney+ at Christmas next year.

Actor and singer Donald Glover will reprise his role as the dashing smuggler for TV series “Lando,” while Hayden Christensen will return as Darth Vader in “Kenobi,” based on Jedi master Obi-Wan Kenobi, for what Kennedy called the “rematch of the century.” Production on “Kenobi” is due to start in March.

“This is a new era for ‘Star Wars’ and Lucasfilm with expanded opportunities for continued innovation, high quality story-telling and cinematic experiences like never before,” Kennedy said.

Animated series coming to Disney+ in the next few years include “A Droid Story,” featuring the beloved C-3PO and R2D2, and “The Bad Batch” about experimental clones. – Reuters

LOS ANGELES – British musician FKA twigs on Friday filed a lawsuit against actor Shia LaBeouf, accusing him of physical and emotional abuse during their year-long relationship.

Representatives of LaBeouf, 34, a former child star who dated the singer for about a year in 2018 and 2019, did not respond to a request for comment on Friday.

In a statement to the New York Times, which broke the story, LaBeouf said, “I’m not in any position to tell anyone how my behavior made them feel. I have no excuses for my alcoholism or aggression, only rationalizations. I have been abusive to myself and everyone around me for years. I have a history of hurting the people closest to me. I’m ashamed of that history and am sorry to those I hurt. There is nothing else I can really say.”

The lawsuit says LaBeouf “engaged in a continuous stream of verbal and mental abuse toward Tahliah, belittling her and berating her after the slightest perceived ‘insult’.”

It said that on one occasion in February 2019, the actor slammed Barnett against a car and tried to strangle her.

She also accuses LaBeouf of knowingly giving her a sexually transmitted disease.

Barnett’s attorney Freedman said in a statement that Barnett initially wanted to resolve the matter privately on condition the actor agree to receive “meaningful and consistent psychological treatment”.

“Since he was unwilling to agree to get appropriate help, Ms. Barnett filed this suit to prevent others from unknowingly suffering similar abuse by him,” Freedman said.

LaBeouf found fame as a Disney Channel star on “Even Stevens” and later appeared in movies including “Transformers” and “Indiana Jones and the Kingdom of the Crystal Skull.”

The past decade has seen several run-ins with the law for disorderly conduct, drunk driving and anger management issues. LaBeouf sought treatment for alcoholism in 2014 and 2017. – Reuters

Rapper Lil Wayne pled guilty in federal court to illegally possessing a firearm, prosecutors said on Friday, and he faces up to 10 years in prison.

Wayne, 38, was found last December with a loaded, gold-plated .45 caliber handgun in his baggage aboard a private plane that had landed at an executive airport near Miami.

The rapper was previously found guilty of a felony crime, prohibiting him from having the weapon or ammunition.

Prosecutors from the U.S. Attorney’s office for the Southern District of Florida said in a written statement that police had received an anonymous tip that Wayne was carrying the firearm.

Howard Srebnick, the last known lawyer representing Wayne, whose real name is Dwayne Michael Carter, did not immediately respond to requests for comment.

Wayne is scheduled to be sentenced on Jan. 28.

TMZ reported on its website on Friday that Wayne reached a plea deal with prosecutors in exchange for leniency, but ultimately his sentence is up to U.S. District Judge Kathleen Williams.

Prosecutors did not immediately respond to requests for comment regarding any plea deal. – Reuters

By Andrius Sytas and Hyonhee Shin

VILNIUS/SEOUL – South Korean filmmaker Kim Ki-duk, a controversial figure both for his work and in his personal life, died in Latvia from coronavirus complications on Friday, a Latvian film official said.

Kim, who had won awards at the Venice, Cannes and Berlin film festivals, had been staying in the Latvian capital Riga, in a private capacity after travelling to neighbouring Estonia for work, according to Dita Rietuma, director of Latvia’s state National Film Centre.

Kim earned global praise as a regular at international festivals but also faced criticism especially over his portrayals of women, including in the ultra-violent “Pieta.” That film won the Golden Lion prize at the Venice Film Festival in 2012.

His reputation was also damaged by several accusations of rape and sexual harassment by a series of actresses amid the global #MeToo movement.

Kim had not directly responded to those claims, but appealed in November after losing a lawsuit he pursued against one of the actresses and a local TV network that broadcast her accusations. – Reuters

By Lisa Richwine and Helen Coster

LOS ANGELES – Walt Disney Co on Thursday announced a heavy slate of new shows for its streaming services, including Marvel and Star Wars series on its fast-growing Disney+ platform and programming from reality TV fan-favorites the Kardashians for Hulu.

The blizzard of new content announcements in a marathon investor day presentation also came with bold new business targets – and programming costs of up to $16 billion in fiscal 2024 – as Disney races with US entertainment industry rivals to catch up to video streaming pioneer Netflix Inc.

By the end of fiscal 2024, Disney expects to attract as many as 350 million global subscribers across all of its streaming services, easily more than double the 137 million it has today. Armed with fresh content, Disney will also raise the price of Disney+ by $1 in the U.S. to $7.99 per month and by 2 euros in continental Europe to 8.99 euros ($10.92).

The aggressive push comes as Disney taps into a home entertainment boom stoked by the global coronavirus pandemic, with more people staying indoors and seeking out new shows. Launched less than a year ago, Disney+ has already hit 86.8 million subscribers, Disney said, nearly reaching the upper end of a goal its previously set for 2024.

“It is clear our strategy has already positioned us as a leading global streaming service provider, and that is within just one year of launching Disney+,” Disney Chief Financial Officer Christine McCarthy said.

Disney said it plans to release 10 new TV series each in the Marvel and Star Wars franchises, including two spinoffs of “The Mandalorian,” over the next few years..

Customers should expect about 100 or more titles every year, executives said in the presentation to investors.

The company announced new programming for Hulu and Star, a general entertainment service it will launch overseas in February. This will include content from the popular Kardashian family, which this year announced it was ending its long-running reality show on NBCUniversal’s E! network..

Disney said it continues to expect Disney+ will reach profitability in 2024, and shares rose 4% in after-hours trading during the investor presentation.

The US entertainment industry has scrambled to match Netflix this year. Disney, AT&T’s WarnerMedia and Comcast Corp’s NBCUniversal have all restructured operations to focus on streaming video services.

On Thursday, Disney set higher subscriber targets, fueled by billions of dollars invested in new programming. The company estimated it would spend between $14 billion to $16 billion on content in fiscal 2024.

Disney+ is now expected to reach 230 million to 260 million customers by 2024, up from a previous projection of 60 million to 90 million.

The company said between 30% to 40% of the new subscriber forecast came from Disney+ Hotstar in India.

Disney+ has been boosted by the popularity of “The Mandalorian” TV series, a Star Wars spinoff featuring the character popularly known as Baby Yoda. On Thursday, Disney said it planned two further spinoff series, “The Rangers of the New Republic” and “Ahsoka.”

Including upgraded expectations for Hulu and ESPN+, Disney said it could reach 300 million to 350 million streaming subscribers worldwide.

Those numbers would challenge Netflix, which pioneered streaming in 2007 and had 195 million paying subscribers at the end of October.

Hollywood is closely following Disney’s plans a week after AT&T Inc’s Warner Bros upended the film business by saying it would debut all 17 of its 2021 movies on its HBO Max streaming service on the same day they hit theaters. .

That left cinema chains including AMC Entertainment Holdings Inc, Cineworld Group and Cinemark Holdings Inc disgruntled about losing the window when they can screen movies exclusively in theaters before productions hit streaming services.

Disney said on Thursday two films – “Pinocchio” and “Peter Pan & Wendy” – would skip theaters and go straight to Disney+, but it did not announce sweeping changes to its movie release strategy as Warner Bros. did.