Advance screening of ‘U-Turn’ on Oct. 29 on Ktx.Ph Be among the first to enjoy “U-Turn,” Star Cinema’s horror offering starring the Millennial Horror Queen, Kim Chiu as it streams in advance on October 29 (Thursday) on KTX.PH.

An adaptation of the 2016 Indian movie of the same title, “U-Turn” revolves around Donna Suarez, a reporter who wants to have a big break. One day, she comes across a case, which she suspects as a suicide. After a few days, a similar case turns up again. Hoping that these cases could give her the break she has been waiting for, she used them in her stories. But karma would soon hit her when her brother also dies in an alleged suicide.

With a valid reason to dig into the cases, she enlists the help of her boyfriend Robin (Tony Labrusca) and police officer Kevin (JM de Guzman) to find the connection between the strange deaths.

Manila’s first boutique dance fitness studio, 808 Studio, has teamed up with Smart Signature for the first-ever 808 Land, a week of virtual dance fitness parties with exclusive DJ mixes until Oct. 31.

Happening via Zoom, 808 Land features a 45-minute power-packed dance fitness class every day led by 808 instructors. Each class has a different dance party theme and exclusive mixes by 808’s resident DJs that will surely get you busting your move whether you are a pro dancer or a beginner – absolutely no dance experience necessary. Smart Signature’s partnership with 808 Studio is just one of the ways the brand enables customers to live an elevated lifestyle through its generous plans, curated experiences, and exclusive lifestyle treats that appeal to the many different passions of subscribers, such as fitness, art, music, films, and more.

For the event, participants can look forward to adrenaline-charged playlists inspired by today’s hottest artists, including BTS, Beyonce, Ariana Grande, and Taylor Swift, as well as different genres, like Disco, Hip Hop, and EDM.

As an exclusive perk, Smart Signature subscribers can get a chance to win 2 passes to the BTS 808 Land x #SmartSignature class. Simply Check out Smart Signature’s Instagram post at @livesmart and comment what drives you to #MakeYourMark, tag your fellow goal-slayer to share your prize with, and share the post to your stories.

“Asia’s King of Talk” Boy Abunda is taking his expertise on show business, talk shows, and hosting on the live streaming app Kumu as he launches his newest program, “The Best Talk,” on the FYE Channel every Saturday, 9 p.m.

After hosting Cinema One’s “Inside the Cinema” for a decade, the seasoned talk show host returns to lead the cable channel’s latest online offering by conducting unfiltered interviews with today’s hottest celebrities and known personalities. 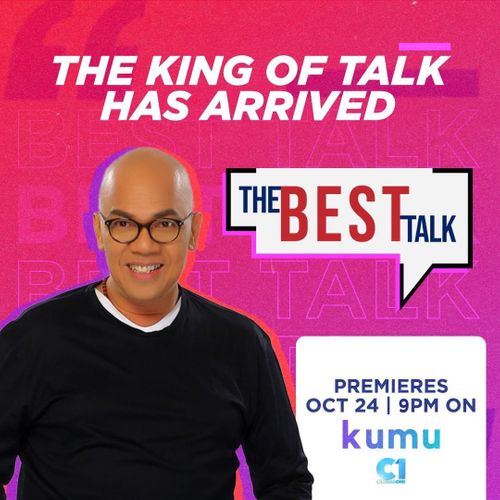 He fills the gap between mainstream media and online content creators and up-and-coming Kumu live streamers by getting to know them more on his show.

Aside from these illuminating conversations, “The Best Talk” will also feature Tito Boy’s live masterclass where he will tackle the significant components that make a successful talk show personality with a campaign-winning streamer on Kumu.

The live program is the latest addition to ABS-CBN’s recently launched FYE Channel on the trendsetting app Kumu, which offers a wide array of shows featuring Kapamilya streamers who entertain, teach, uplift, and converse with viewers via live streaming.