HEART Evangelista stages a fashion show right inside her own home while we’re on ECQ, a flashy one-woman show where she gets to display various fabulous outfits and expensive shoes. The fashion video shows a brisk montage of Heart sashaying in front of the camera, quickly changing outfits, shot in various locations around her house, from her walk-in closet to their living room.

She says this is part of her efforts to combat anxiety attacks. She directed and edited the fashion show herself.

“Personally, getting all glammed up really lifts my mood. I believe that when you look good, you’ll feel good, too! It definitely brightens my day when I get creative and play dress up to create content. Here I am enjoying dressing up and dancing with different looks and hairstyles with the help of @aguilarjeck (her makeup artist).”

Heart is far away from hubby Chiz Escudero who’s staying in Sorsogon, where he’s the governor, to be with his constituents during the lockdown. But the twin kids of Chiz from his first marriage, Chino and Chesi, are staying with Heart. And they’re in good terms.

During the recent Mother Day’s celebration, Heart was so touched when they gave her a card that the actress shared in her social media account.

“Happy, happy Mother’s Day! I hope you have a good day today. Unfortunately, this year’s Mother’s Day is on a lockdown and sadly we are still going through Casper’s passing (their dog) but eventually, we have to move on and stay strong for each other especially while in this lockdown situation.

“Thank you for always being here for us and being our mother figure while quarantine goes on and we don’t see Daddy and our mom everyday.

“Us spending time here at home together has shown me and Ate your love for daddy, for us, for our dogs, for all who are within the house, and your fellow Filipinos. We appreciate your love and effort to care for us and daddy. We love you very much.”

This is the best compliment any caring stepmother can get from her stepchildren. 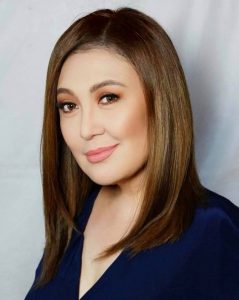 Sharon Cuneta still cannot just ignore annoying netizens who intentionally bash celebrities like her just to irritate them. After her online concert for ABS-CBN’s “Pantawid ng Pag-ibig” fundraising earned more than P2 million, a basher, @catherinerosario6956, insinuated that the singer-actress will just pocket the money.

Her fans quickly defended her, saying she won’t do such a thing as she’s already a millionaire.

Of course, no one dared to face her and some of them even quickly deleted their comments. 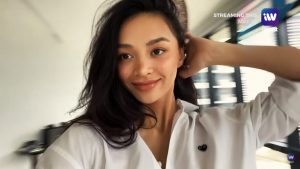 Kylie Versoza, Miss International 2016 winner, has shown that she is also an effective actress in films like “Kasal,” “Abay Babes” and “Ang Panday.” She’s now the leading lady of her real-life sweetheart, Jake Cuenca, in the first-of-a-kind movie, “Love Lockdown,” now showing on iWant streaming.

Jake and Kylie met each other when they did the TV soap, “Los Bastardos,” where their love affair bloomed.

Kylie says: “It was a one-of-a-kind experience doing ‘Love Lockdown’ as we did everything ourselves, not just acting but also including the behind the scenes work. We even had to be the production designers ourselves. Siyempre for me, even if Jake and I have decided to do the quarantine in his apartment, siyempre parang nakaka-pressure din sa akin na umarte next to him kasi he’s much more of a veteran actor compared to me. So nakakakaba siya, but it was a very unique experience. I’m just glad to be doing work at this moment and I’m glad that this is such a good concept. Despite everything that’s happening now, we were still able to work and produce this masterpiece.”

Kylie says doing behind-the-scenes work helped her in understanding the work of the production staff even more. “It made me realize how difficult production work is and it also gave me a newfound respect for people working behind the scenes. Ang dami kong natutuhan dito and I also want to thank Jake as I learned so much from him while we’re doing this movie. I gained an in-depth perspective of how Jake worked and I realized he’s just so professional dahil sa commitment niya as an artist and it gave me more respect for the whole craft of acting and movie making.”

Also in the cast of “Love Lockdown” are Angelica Panganiban, JM de Guzman, Sue Ramirez, Arjo Atayde and Tony Labrusca. This is the first digital film shot during the corona quarantine and about the effects of the lockdown. It’s also one of the three movies that will be streaming on iWant. The other two are “Belle Douleur” (starts streaming on May 20) and “Malaya” (starts on May 28).

After the controversial Barretto Sisters’ family feud that became fodder for gossip columns, it seems BB Gandanghari now wants to replace them with his, er, her tirades against his brother Robin Padilla. These past few weeks, the former Rustom Padilla has been ranting online about feeling neglected by the Padillas, focusing mainly on Robin. BB is alone living in the US.

Robin replied saying he had problems of his own, including his back injury that caused him to be hospitalized. He said they love BB but other members of their family also had health issues of their own, so BB should not sulk if they couldn’t communicate with him, er, her.

BB felt Robin said sorry just so the latter won’t be discredited in the eyes of the public.

“Tigilan natin ang public imaging. Tigilan natin ang pagpapaguwapo o pagpapabango at my expense. Love is the most abused word, and I think I can debate about that with anyone in this world. So, kung love ang pag-uusapan at ganyang klaseng pagmamahal ang sinasabi n’yo sa akin at ipinaparamdam n’yo sa akin, then maybe this needs a conversation,” said BB.

BB revealed they have not talked for two or three years and when BB decided to start a new life in the US, Robin did not even support her in her aim to make it as an actress in Hollywood. “Grabe ka Robin… you don’t want me to succeed? Why? You want me to struggle, why?”

Well, we hope this misunderstanding between BB and her siblings will be settled soon before it gets even worse. And we’re wishing BB, who’s now a golden girl and will be 52 this coming September, to achieve her very realistic dream of having a very successful career as a Hollywood actress and be paired with the top actors there now.

Where man and nature live in harmony