The good-looking couple are very secretive when it comes to their relationship.

GMA 7 talent Kris Bernal and her non-showbiz fiancé, Perry Choi, have decided to close down the Korean restaurant which they own in Quezon City.

No need to explain the reason for their decision because many eateries have closed shop, too, said Kris.

What may happen is their exchange of vows.

“Beautiful ang story kung paano nag-propose sa kanya si Perry,” said a friend of Kris’. “It was in February this year when Perry marked his birthday and Kris surprised him with a party.

“Well, nabigla si Kris, when, without notice, Perry kneeled down before her and in the presence of everyone, proposed.”

Kris may soon do a GMA series. She was last seen in “Asawa Ko, Karibal Ko” with Rayver Cruz and Thea Tolentino. 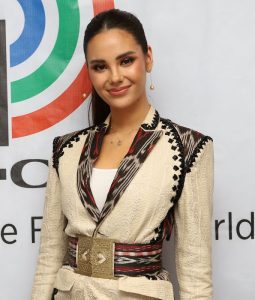 A number of people say Sam Milby and former Miss Universe Catriona Gray are perfect for each other.

The two remain secretive about their romance, and refuse to talk about it in interviews.

“Pero, pareho silang mabait,” commented an entertainment writer who had the chance to interview them separately.

Sam and Catriona share two things in common: they were both born abroad to Filipino mothers.

“Binata na si Sam when he tried his luck in the country as a commercial model. It was when he joined ‘Pinoy Big Brother’ (PBB for short) that he was discovered for the movies and TV.”

At one time, Sam was linked to Anne Curtis, now happily married to Erwan Heussaff and mother to four-month-old Dahlia.

He is currently in the cast of the series, “Ang Sa Iyo Ay Akin,” with Maricel Soriano and Iza Calzado.

Catriona, who used to be in a relationship with model-actor Clint Bondad, has just recorded a song. Aside from her music, she is busy with several advocacies.

The couple will be parents soon. Aicelle said she wants a girl for a firstborn, while Mark wants a boy.

Meanwhile, Aicelle is also waiting for her show, “Centerstage” to resume. “Centerstage” features young singers as contestants. Currently, those who are aged 20 and below – and senior citizens – are not allowed to venture out of homes unless very necessary because they are most susceptible to COVID-19.

Aicelle is also in the Sunday variety show, “All Out Sundays,” aired on GMA and via live streaming.

Since taping for her show, “Bilangin ang Bituin sa Langit,” has yet to resume, Nora Aunor is making the most of the current lockdown.

Guy, with the help of her fans, the Noranians, distributed relief goods to some of our marginalized kababayan.

We wonder whether the 67-year-old actress is in touch with her kids, namely Lotlot, Ian, Matet, Kiko and Kenneth.

Although Ian is her only biological child with former husband Christopher de Leon, the children all look to the actor as their Tatay.

Christopher, of course, is happily married to actress Sandy Andolong, with whom he has five kids.