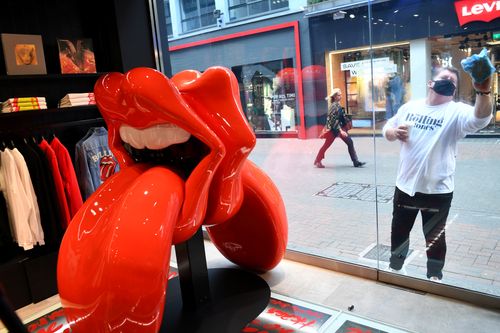 LONDON – The Rolling Stones opened their first dedicated store on Wednesday in London’s Carnaby Street, despite the coronavirus pandemic having drastically reduced footfall and the number of tourists visiting the city.

RS No. 9 Carnaby sells clothes, merchandise and music and features a video wall with a film of the band, a soundwave installation to represent part of the 1960s track “Paint It Black” and a super-sized version of the band’s lips and tongue logo.

“Why would you open a shop during a pandemic? Well, you know, it’s eternal optimism,” said singer Mick Jagger.

“You could have put it off, I guess, till next year… but there will be a little bit of pick up, I think. And people will be curious and people are out and about a bit more than they were,” the 77-year-old added.

When asked why they chose to open on Carnaby Street, a road synonymous with the swinging sixties in London, Jagger said it is close to where the band used to work and rehearse.

This week the Stones released a remastered version of their 1973 album “Goats Head Soup,” which contains unearthed tracks such as “All the Rage.”