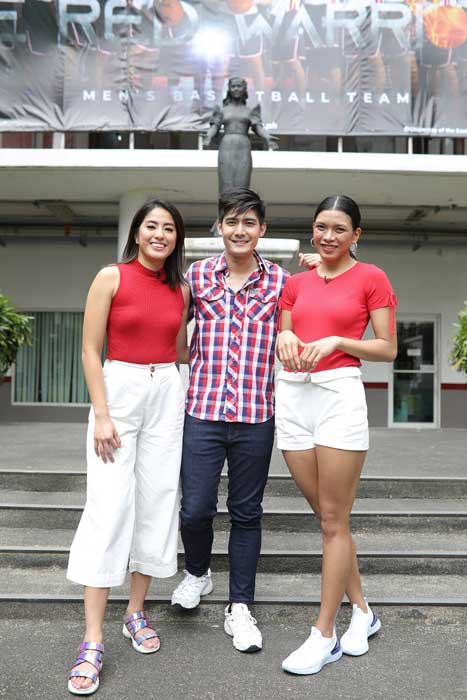 “University Town” (UTown) hosts Robi Domingo, Gretchen Ho, and Alyssa Valdez, and “Upfront” hosts Martin Javier, Janeena Chan, Turs Daza, and Angelique Manto expressed their gratitude to ABS-CBN Sports as they bid goodbye to the shows that made an impact on their lives.

For Robi and Gretchen, who co-hosted “UTown” for four seasons, doing the show was always a revitalizing experience as it brought them back to their days as students.

“Whenever I see the students and organizations in that school, not only I get reminded of my moments on campus but also I get reminded of my hopes, dreams, and aspirations,” Robi said of their program, which highlights the culture, achievements, notable alumni, and students from each UAAP campus.

“We get to immerse in university life again by talking with the students. It honestly feels like a playground where we have fun,” added Gretchen.

The former student-athlete honed her hosting chops in ABS-CBN Sports, just like her fellow Lady Eagle Alyssa, who joined the show in Season 3. “The Phenom” would also land a hosting gig in “Upfront,” ABS-CBN Sports’ award-winning sports lifestyle program.

“My experiences in ‘Upfront’ and ‘UTown’ helped me gain my confidence and taught me that with hard work, I could learn anything and be good at something I never thought of,” she shared.

Like her, UP Fighting Maroons’ high-flyer Ricci Rivero also got to explore a passion outside basketball as a segment host for “Upfront,” a show where fans got to know more about their favorite athletes, especially how they are like outside the court.

“I enjoyed hosting! My stint with Upfront made me more comfortable in front of the camera and became more spontaneous,” he said.

Guiding Alyssa and Ricci in their transition were “Upfront” hosts Martin, Angelique, Turs, and Janeena, who are all thankful for their experience leading the show, which first began as a pre-game and halftime program for UAAP Season 78 in 2015.

For Martin and Angelique, being part of the “Upfront” squad is a fulfilling experience, as both honed their talents and nurtured themselves under the guidance of ABS-CBN Sports.

“For the past four years, I’ve been privileged to bring you the action from the sidelines to your television screens. From not making the cut in my courtside audition to covering games in the biggest venues, it has been a rollercoaster ride. I’ll always be honored to be part of this family,” said Martin, who was also part of the broadcast panel for NCAA, UAAP, and MPBL.

Angelique, a former UAAP courtside reporter, added, “I got to explore and grow my passion for my craft, and I got to fulfill promises for my late father. I will not be who I am today if not for the lessons, trust, and guidance of every single person I have worked with at S+A.”

As for Turs, his time in “Upfront” will always be memorable as he believes the program will leave a lasting legacy in the sports community.

“It gave fans the opportunity to see their sports idols as real people with interests, styles, and personalities. The legacy of ‘Upfront’ is similar to that of ABS CBN, to bring viewers closer to their idols,” he explained.

Janeena, the show’s remaining original host, paid tribute to the people she worked with for their efforts to make the program impactful and thanking them for the once-in-a-lifetime opportunity to be part of the “Upfront” squad.

“It’s been a huge honor to have started and ended the story of ‘Upfront’ from day one, and I’d like to say a huge thank you to our amazing bosses, producers, directors, staff, and the entire team for taking a chance on me! ‘Upfront’ is truly one of my life’s biggest blessings!” she exclaimed.

With the curtains about to close for ABS-CBN Sports, Martin, Janeena, Turs, and Angelique will take a stroll back to memory lane with the “Best of Upfront” finale episode featuring the most talked about moments with athletes in segments like Upfront Swag, Challenge Accepted, Squad Goals, 10 Things, What’s in My Bag, and Upfront Trending. Watch it on August 27, 8 a.m. with replays at 1 p.m. and 6 p.m., on LIGA and LIGA HD.

Meanwhile, viewers can rewatch the segments of “UTown” online via ABS-CBN Sports’ official YouTube channel and on iWant.

Another Garcia steps up to fight Pacquiao