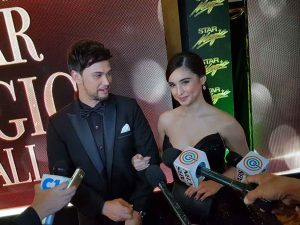 He later added this in his social media account: “And just like that, we’re going to be parents! I can’t even express the joy of this day! I’ve been waiting to scream it out to the world. Yes! My gorgeous wife and I are having a baby! Been praying to God for this, and for years, the answer was ‘not yet.’ Fast forward to today, and God has blessed us in His perfect timing. And thank you #myeverything @coleen for bearing with me cause everyone knows I’m the actual pregnant one! Hahaha you’re still sexy, gorgeous, gassy but classy. I love you so much #Mama.”

Billy quickly dismissed rumors that their child is a product of the corona lockdown or extended community quarantine. “No, it’s not an ECQ baby kasi nagawa siya five months ago pa at the start of the year. LOL!”

Another couple who announced a new pregnancy is 2005 Miss International Lara Quigaman and hubby Marco Alcaraz. They have two sons named Noah and Nolan and this will be their third child expected to come out in September.

Meantime, “Unang Hirit” and “Eat Bulaga” host Luane Dy gave birth to her and actor hubby Carlo Gonzales’ first child, a boy, on May 1. They tied the knot on November 28, 2019. Luanne wrote this in her social media account to welcome their baby:

There are three showbiz couples who are all newly married.

In a Facebook Live chat for a product he is endorsing, he was asked how married life is and he quickly replied: “It’s great! It’s amazing! I recommend it to all my friends. I was talking nga to my other batchmates, about married life. At sabi ko, ‘Bro, I think you should get married too, man.’ I don’t know, maybe I’m just in my honeymoon stage or I’m still in the beginning of my marriage, but you know, it’s amazing to wake up, to sleep beside the person you love the most.”

He does not mind if the lockdown came so soon after their wedding. “Siempre we’re worried din, but staying home also makes you learn about yourself so much more and you learn also about humility so much. One thing I learned, you are not always right, because the wife is always correct.”

He quickly added. “But on a serious note, you know, you really learn how to balance things and when to just give in, or just how to agree. We are given more time by the ECQ to just focus on each other and learn how to be more patient and all these things. It’s a nice phase kumbaga. Being with my wife, it’s also in a way, a blessing in disguise that we have an extended honeymoon. It’s a time na we’re really ‘locked in’ in our place and we’re getting to know each other more and more every single day. That’s the interesting part. We even take turns sa pagluluto ng meals namin.”

Juancho Trivino and wife Joyce Pring said they initially had anxieties about the ongoing lockdown due to the corona health crisis.

“Siempre, kakakasal lang namin, may nangyari agad na ganito,” said Juancho in a video interview. “We’re worried not only for ourselves but also for our respective families. We don’t want anyone to become infected by the virus.”

Like Sarah and Matteo, they reside in their own condo unit.

“Wala kaming time to go anywhere para makapag-honeymoon,” he said. “We just stay home for our own safety. What happened was something all of us are not prepared for. Ni hindi tayo makapagtrabaho. Lahat tayo, may kanya-kanyang pinagdaraanan.”

“Yes, lahat naman ng tao, makaka-relate sa nangyayari ngayon,” Joyce added. “This has been a struggle for everyone at iba-iba lang siguro ang levels ng ating struggle. Lalo na ang medical workers and frontliners natin, kasi they’re directly involved in fighting the virus so we should all thank them and pray for their safety and good health.”

And hopefully, they can go back to hosting “Unang Hirit” and go on with their interrupted honeymoon when things get back to the new normal.

Aicelle Santos and Mark Zambrano want to look at things positively and view the corona lockdown as a chance for them to truly get to know each other better as husband and wife.

“We just consider it as a chance para may mas may time kami to devote more time to each other,” said Aicelle. “Dati kasi, pareho kaming laging busy. Ako nga, busy pati weekends noon kasi kapag Sunday, dalawa pa ang shows ko, ‘All Out Sundays’ at lunchtime then ‘Centerstage’ sa gabi. We’re supposed to go to Japan sana, but with this pandemic, matatagalan pa siguro before we can all do some travelling again to other countries.”

“Right after our wedding, we went back to work so we didn’t have a proper honeymoon,” said Mark. “But now, we are given more chance to devote our time to each other kasi we now live under the same roof and have so much time for one another.”

They call this period their “pseudo honeymoon.” They’ve divided their duties and responsibilities as husband and wife.